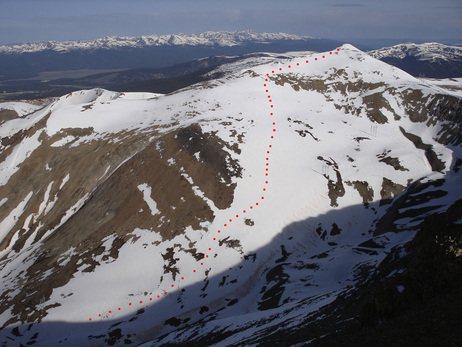 My descent marked. photo from BillMiddlebrook on 13ers.com

There isn't much to be much said about indulging in a solo ski mission. Its a great feeling being out in the mountains that can be somewhat spiritual sometimes. So when I couldn't find a partner for the day I wasn't the least bit disappointed because i've been long overdue for some alone time with the mountains. After looking at the weather forecast for the week it looked like today could be my best day to get up above treeline and enjoy some alpine views. I had heard that the south face of Dyer was a good winter ski and so after looking up some beta I agreed that it would fit the bill for a good solo high alpine tour. And so the plan to ski Colorado's 81st highest was a go. I dropped off Tiana at work in Breck at 7am and then it was off towards good ole Lead-vegas. This was the first time I had really been out of the county since the last avalanche cycle and it was amazing to see how big some of the avy paths along 91 went. Scary stuff! But hey, at least it solidifies my thoughts to stay off steep terrain until spring!
Not long before I was at the winter TH for Iowa Gulch. I gathered my gear and was off. Although it was a sunny day the wind was-a-howling. The wind wasn't too bad lower in the gulch but as I got higher in elevation the wind increased greatly. The good thing about the route, as far as wind is concerned, is that its leeward and so I wasn't getting the full brunt of the wind until I hit the summit ridge. The 3 mile skin up the road was easy as you gain only about 500ft. Great views of East Ball and West Sheridan as you get further up the road. 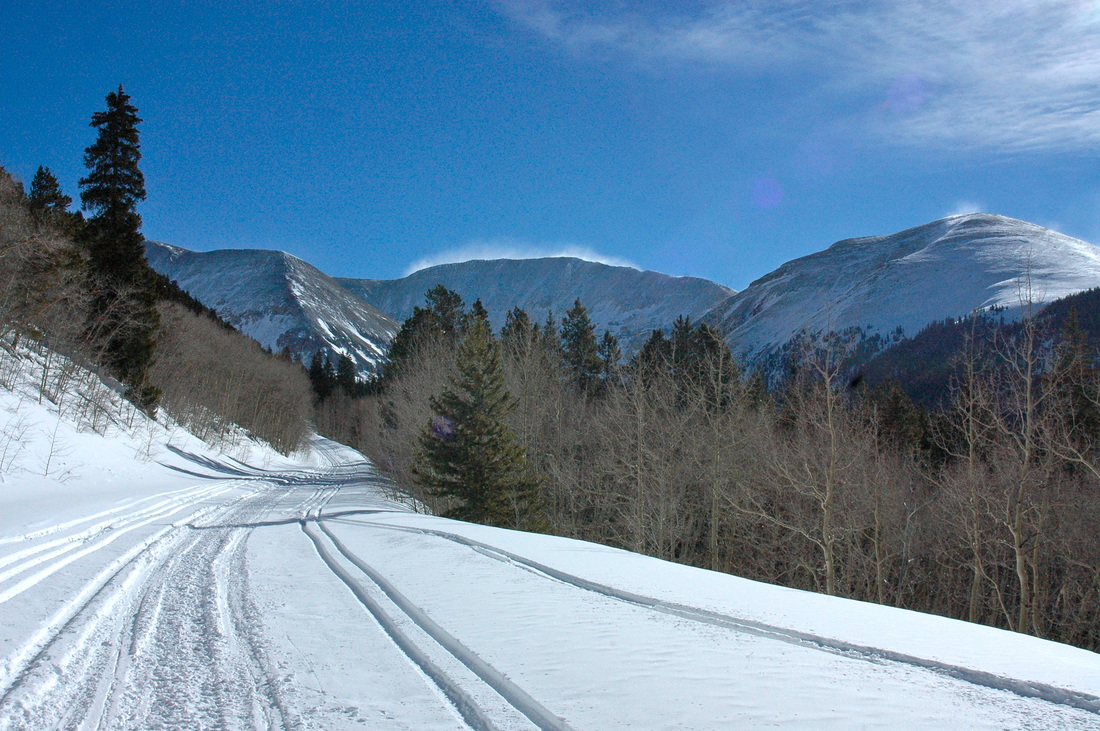 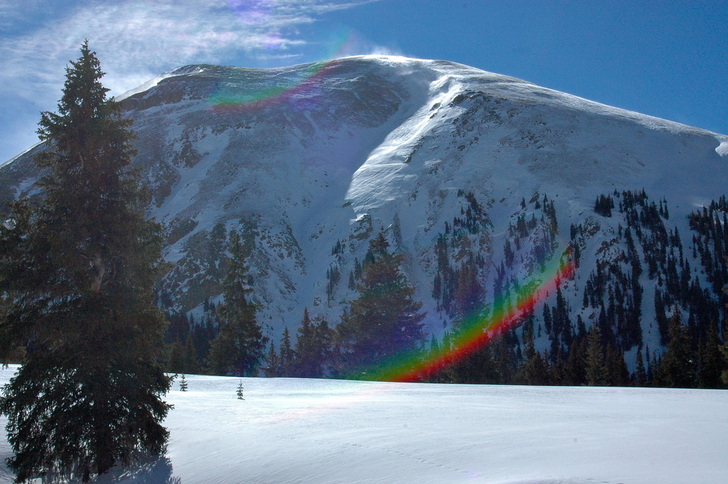 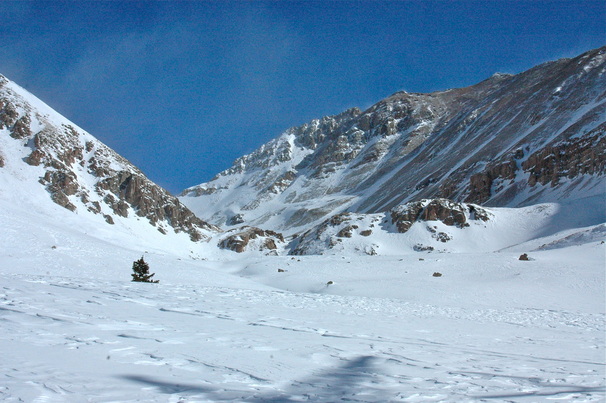 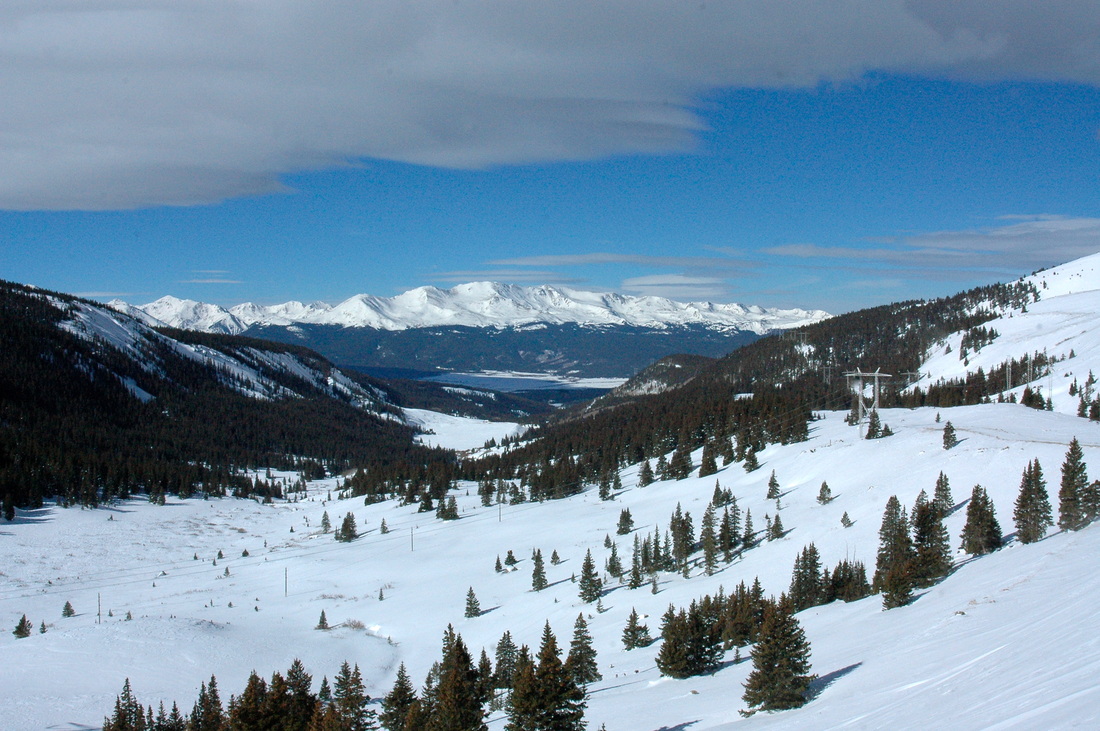 Looking back west towards Mt Massive 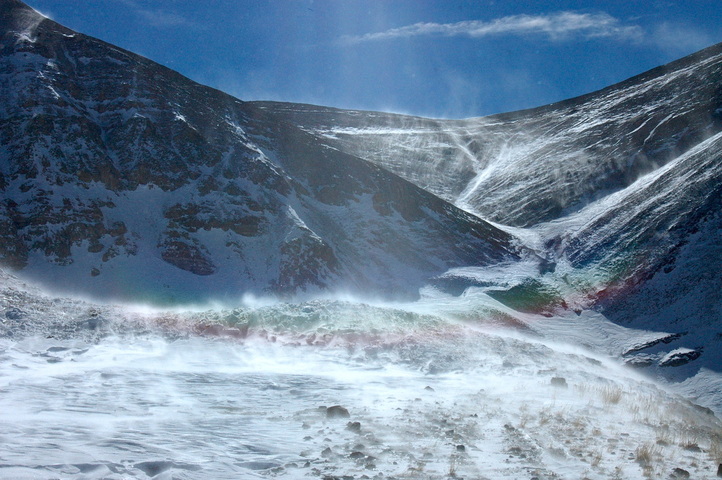 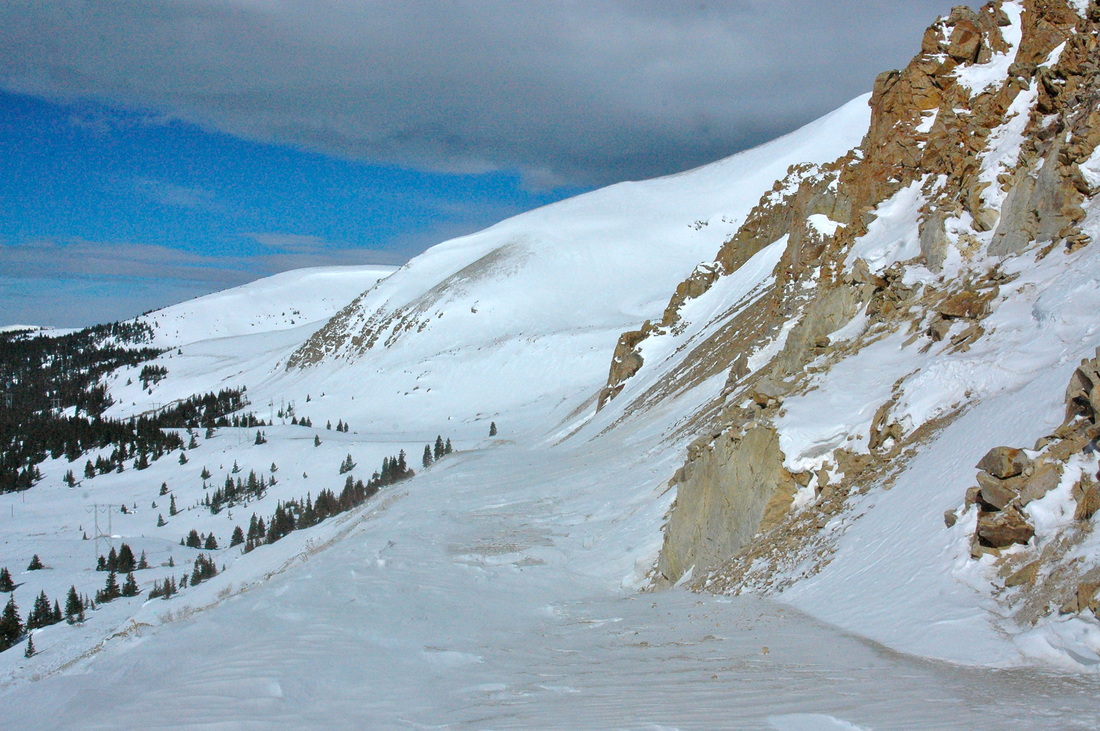 To me, this section as well as the few hundred yards on the other side of me was the only sketchy part of the tour. There was hangfire up high above the road and old debris from past rock/snow slides. Needless to say, I didn't waste any time crossing this. Ball and East Ball in the back.
After rounding the bend into Iowa Gulch is where most of the elevation gain starts. Old mine and cabin ruins start to appear and great views start to come into sight. The rest of the tour to the summit was pretty much a sastrugi factory as the wind has been doing a lot of work up there. 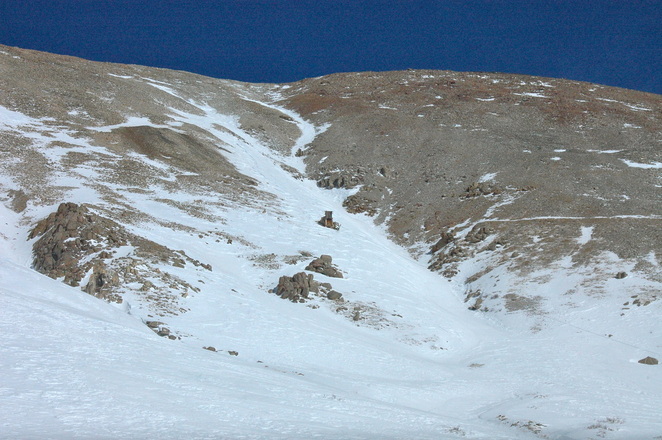 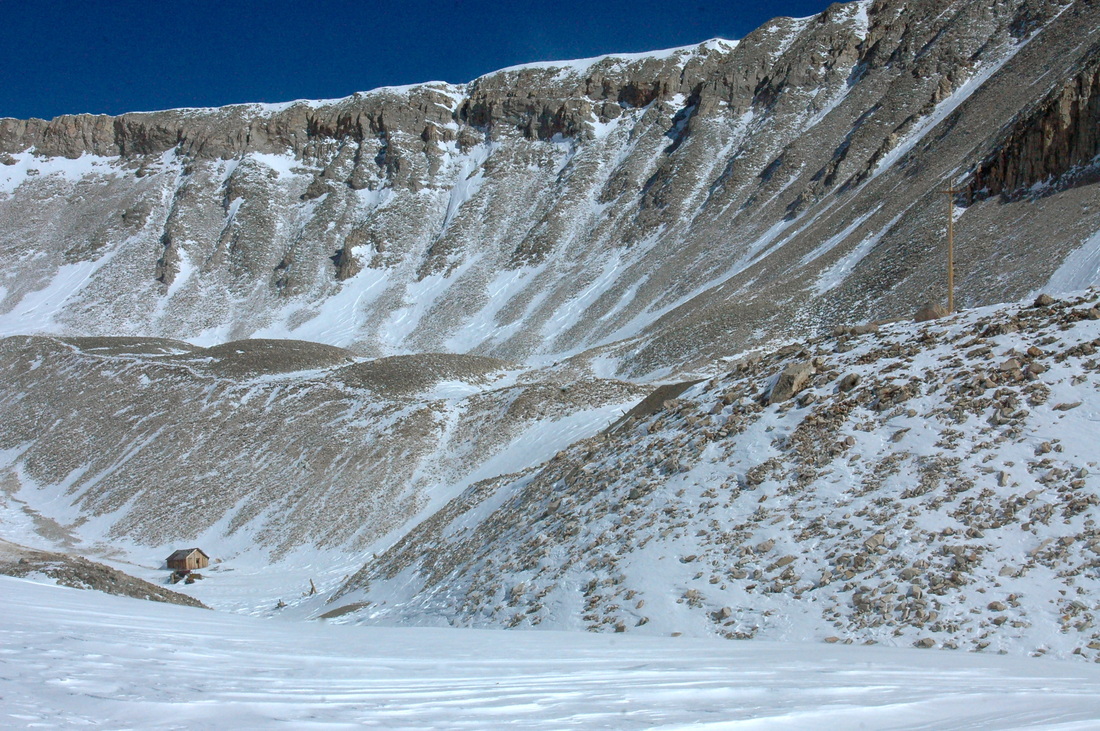 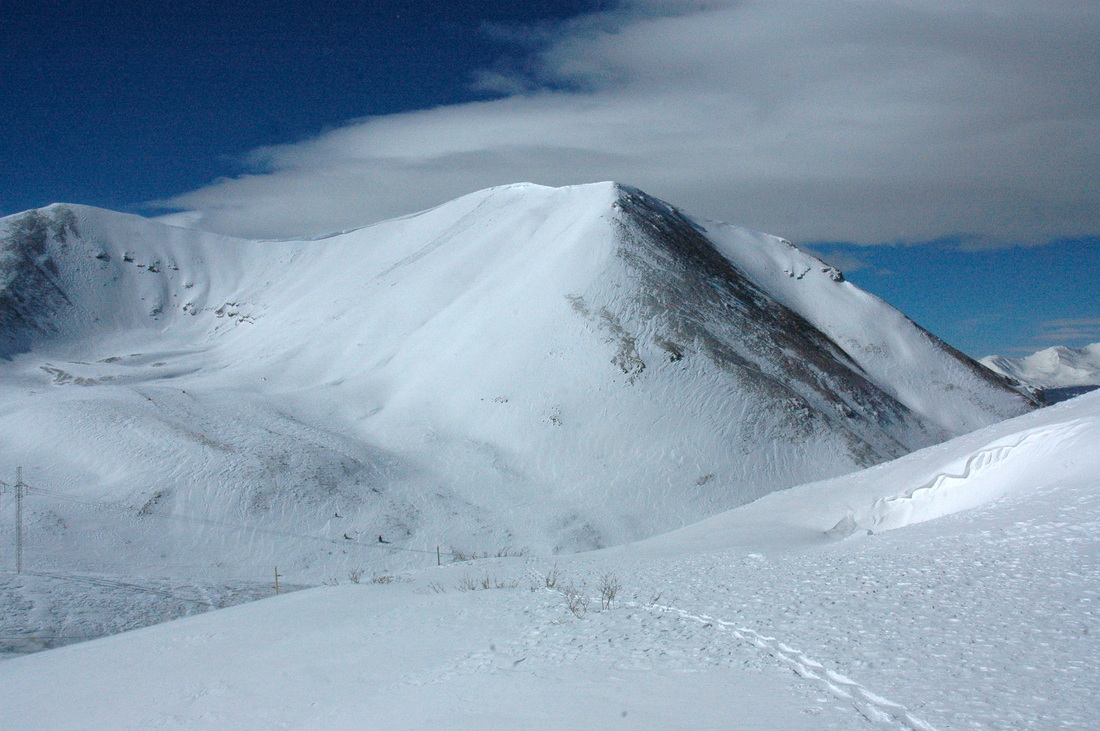 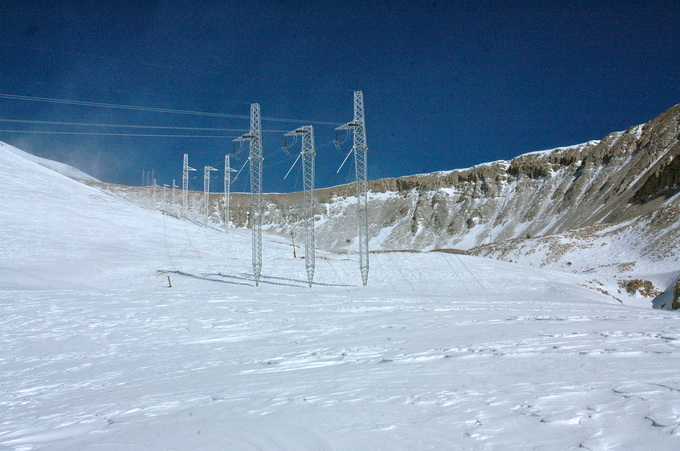 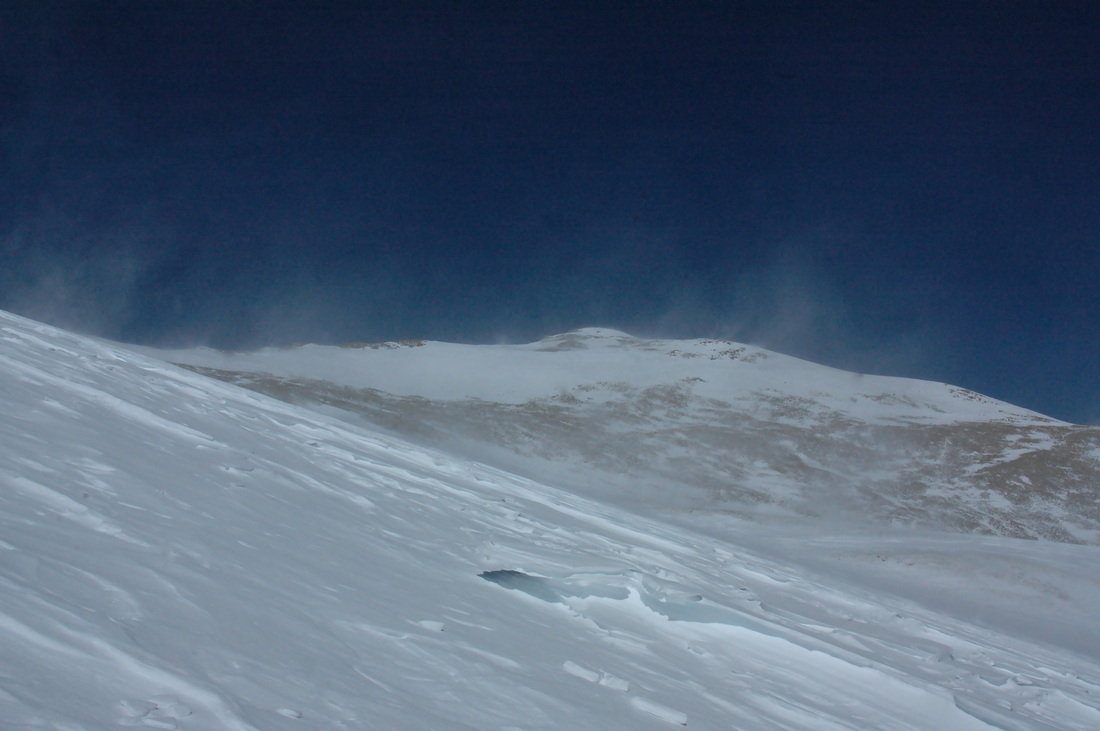 Summit in sight. At least it's not windy 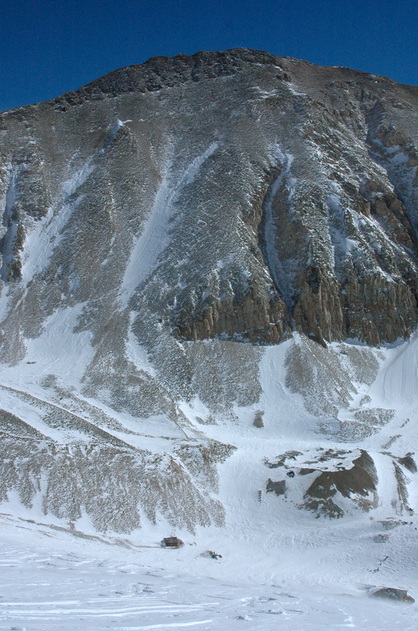 Looking back toward 14er Mt. Sherman
Once I hit the summit ridge I was blessed with grand views of the Sawatch. It was here that I started to get hit with huge gusts of wind every few minutes and it was to the point where I had to stop and literally get on my knees to keep from getting blown over. 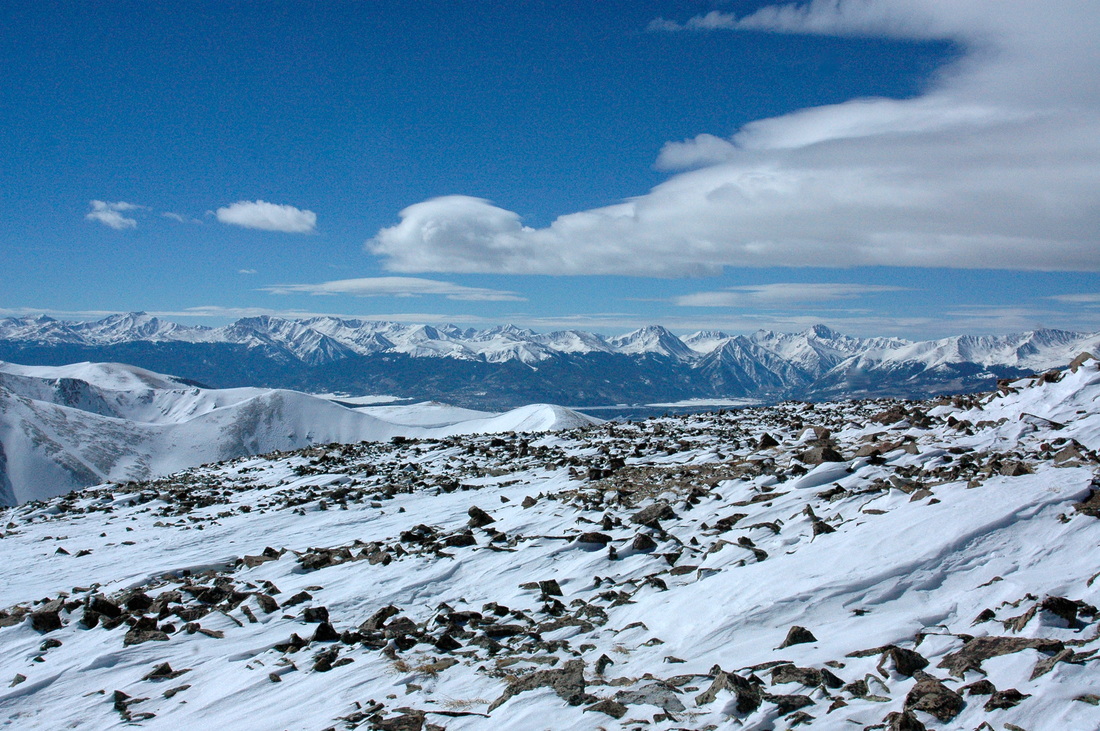 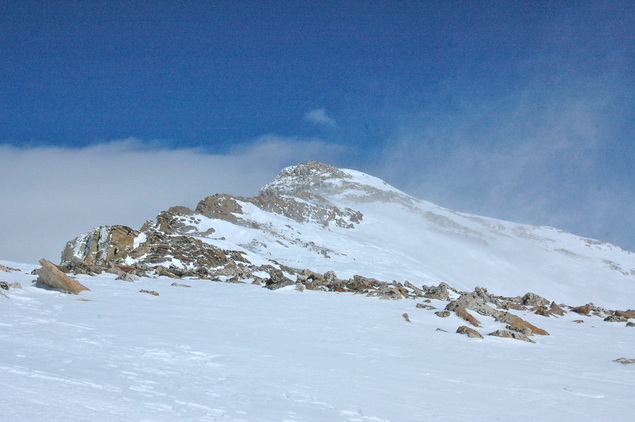 The remaining ridgeline to the summit
The winds got so bad around this point that I would jog the ridge line in between the huge wind gusts and when the gusts would hit I would hunker down, and then repeat. Within about 15 minutes I was standing atop one of Colorado's Centennials and proceeded to soak in the views. I stayed on top and endured the howling winds while taking pics for about 20 minutes before it was time to ski. 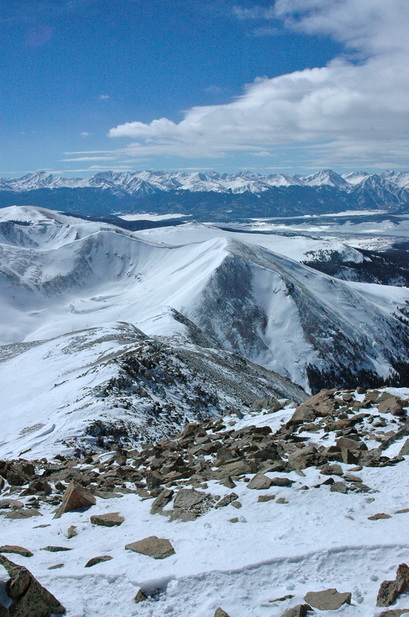 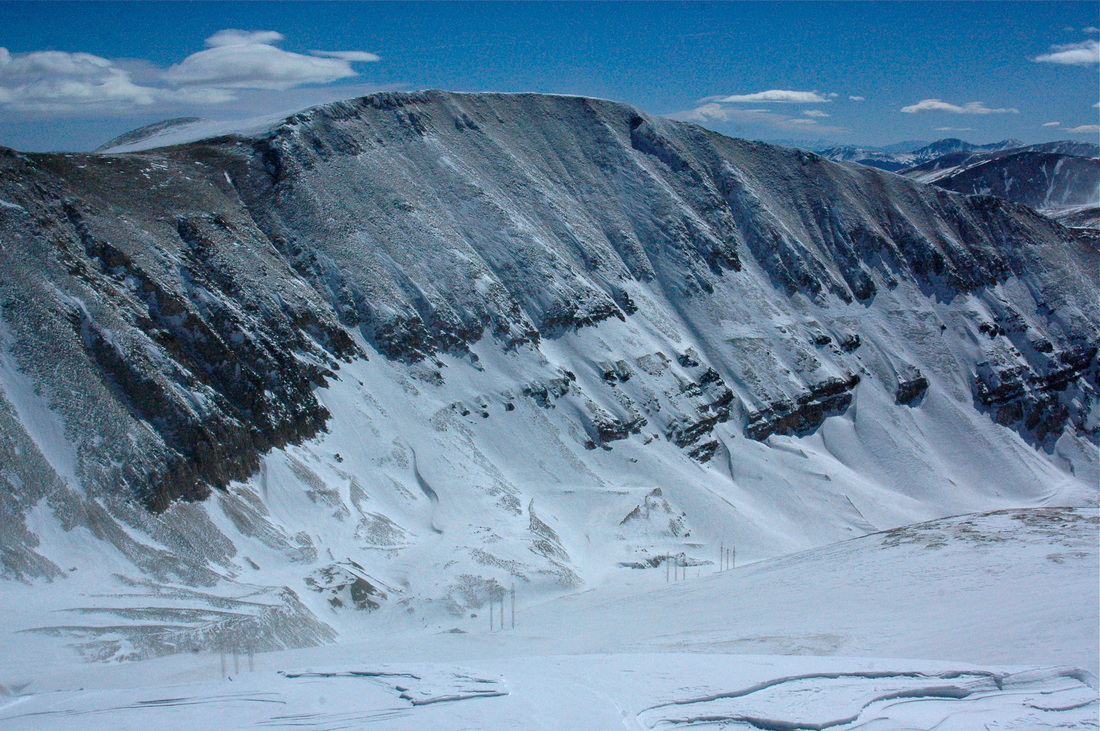 Mt. Sherman and partial view of the ride down
Then I strapped my board back together and it was time for the descent. I walked down about 20 feet or so from the summit and strapped in. There wasn't a continuous line all the way down so after skiing the top patch of snow I had to unstrap and walk across a small section of scree before I was able to ride the rest of the face down. Again, it was a sastrugi factory so I took my time as I made turns all the way back down past the summer TH. I then quickly walked the sketchy part of the road before I went back into ski mode. From there I was pretty much able to push ski the rest of way back to my truck making it about an hour back to the truck from summit. I was back to the truck in a little over 4 hours round trip and was stoked for a nice solo mission in the beautiful Colorado High Country! 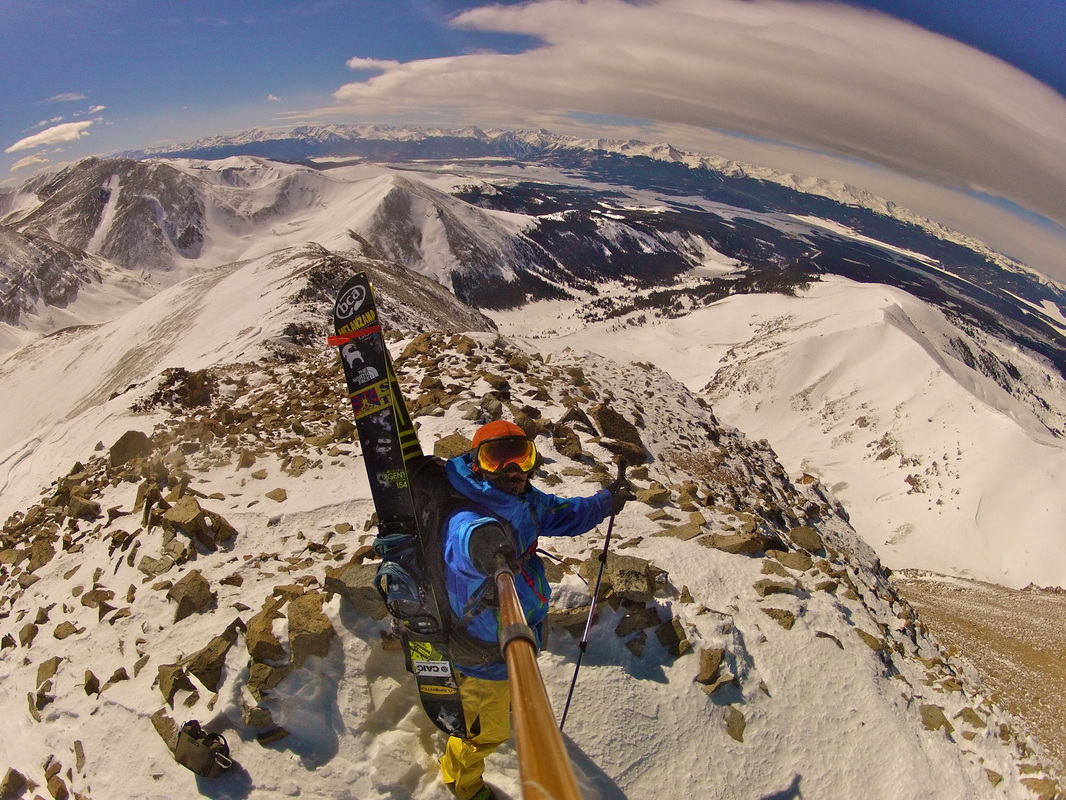 gotta have a summit shot!