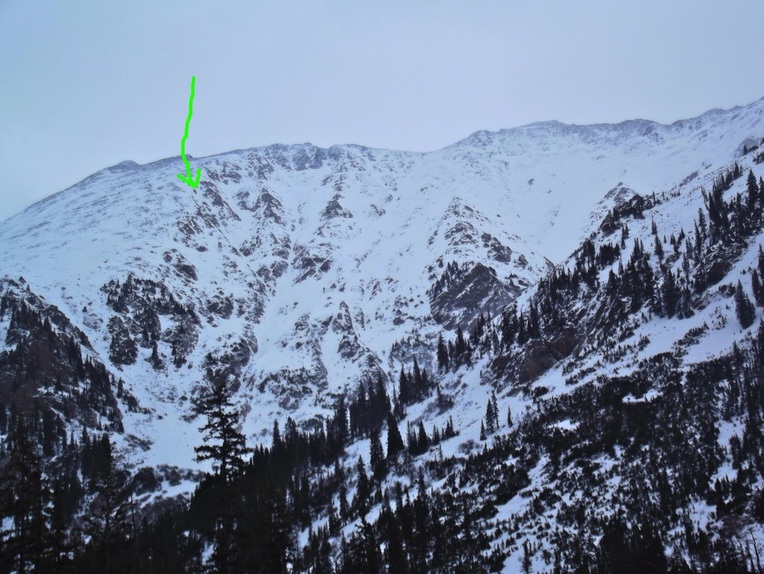 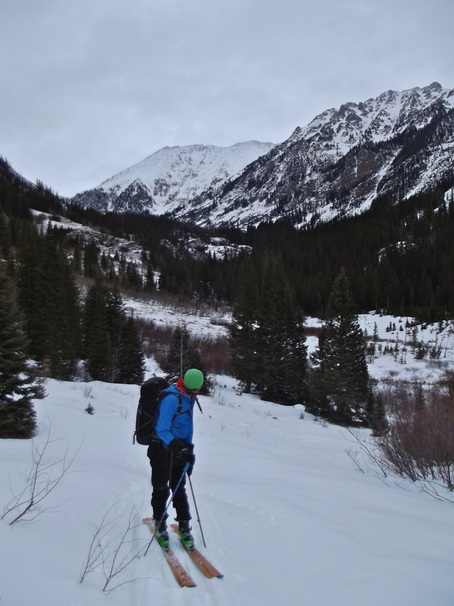 Sometimes you don't get to ski the line that you had intended on skiing. Sometimes you get to ski better! Frank gave me a shout yesterday asking if I would be interested in checking out the SW couloir on Solitude. The answer was of course yes and so another Gore mission was set into play. The only beta that I have seen on skiing Solitude is a TR on TGR on skiing the SW couloir. I have talked to another group of friends that skied the line last season and so we figured we would head up and see if it was in or not. The Gore is great in this aspect that you really have to find things out on your own!
We were on the trail by 7AM and made our way up the drainage in grey bird skies. The forecast for today called for overcast and strong winds 40-45 with 60G. There is a massive Artic storm front headed our way and so we were ok to just get out and explore, even if it meant that conditions weren't going to allow us to ski.
As we made our way further back we started to see some peak faces coming into view. I had studied the topo of the area pretty good last night but have never been back up Pitkin before (and Frank forgot his map). We weren't totally sure what line we had seen on the TGR trip report but one thing that I did notice about the TR was that the line they had skied wasn't on Mount Solitude but rather a line off of Skiers Point. Anyways, as we kept skinning we saw some nice gullies that looked skiable and we decided to use them as a back up line. It wasn't until I got home tonight that I realized that the gully we used as a backup was in fact the line that was on the TR and the line that my friends had skied last season. We pushed on further up valley until we saw this beautiful little gem. The couloir was very narrow, it was sustained 40 degrees plus, and had quite a few choke's. For now we will call it Balboa Couloir. While it isn't very big, it still packs a big punch. While I had wondered if this line had ever been skied before, according to "OLDvail" on 14ers.com this line has been skied before. Although I'm sure it doesn't get skied very often it was great to put in a December descent on this one. 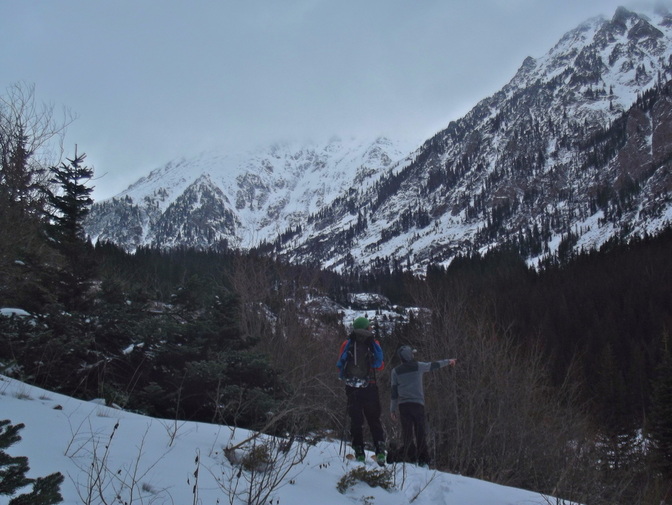 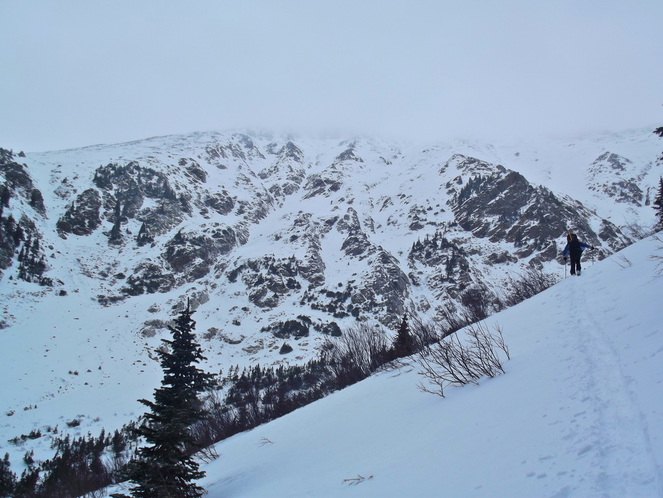 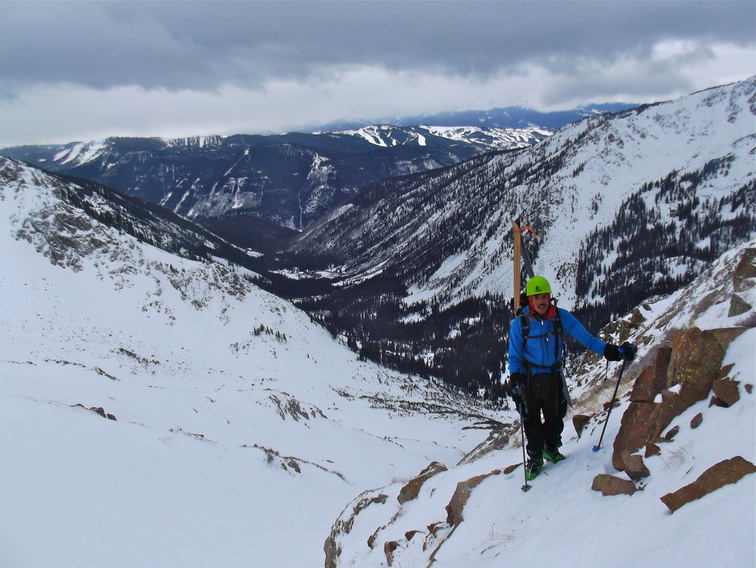 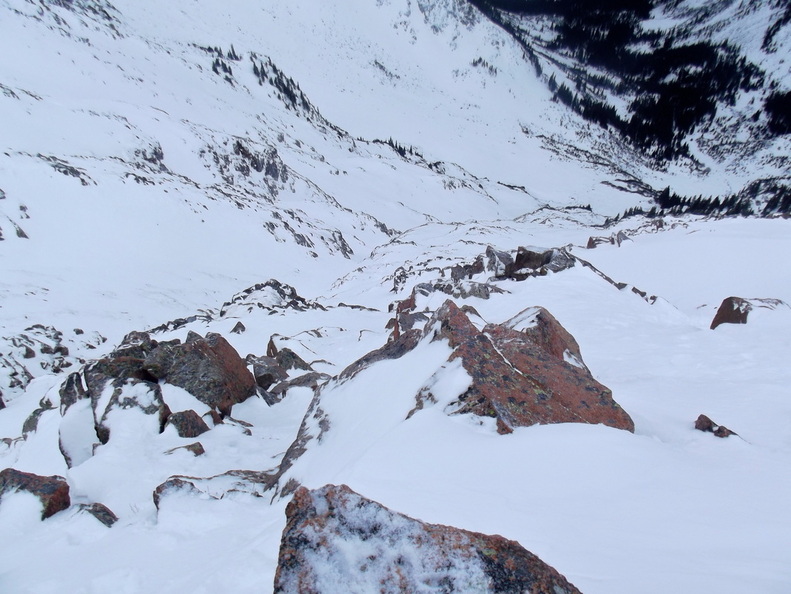 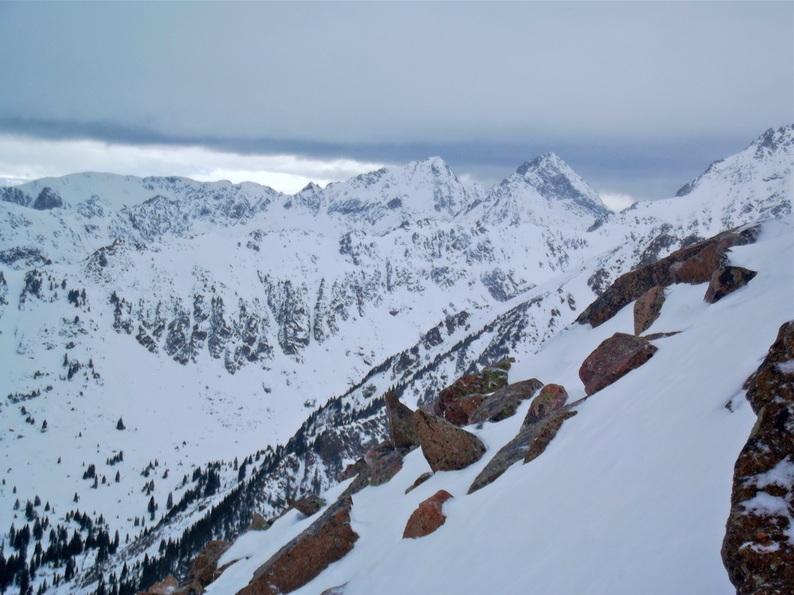 GOREious views. The Fly, Spider and ridge leading up to West Partner 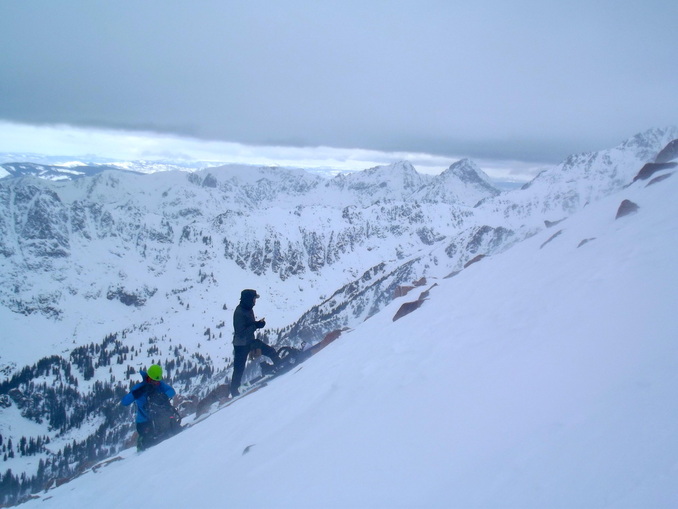 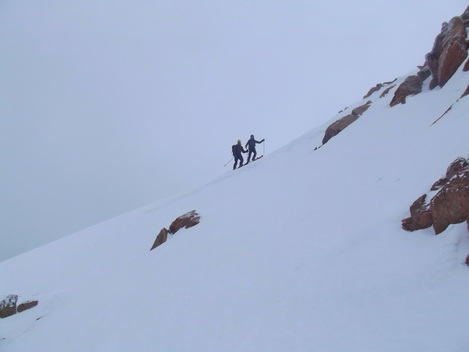 Getting ready to drop in! The winds picked up dramatically as we got higher and to the top of the couloir. We could see in the distance the dark clouds from the cold front pushing in and huge gusts of wind would come up and send freezing graupel in your face. Needless to say, we were not aiming for a summit bid today! We quickly transitioned and discussed how we wanted to ski the line. We had dug a pit above the first choke and found a bomber snowpack beneath us but had neglected to dig one on any of the upper portions of the couloir. We dropped into a bulletproof crust and ended up combat skiing half of the line. In situations like this I always just tell myself that its all training, haha. We did find better conditions on the bottom portion of the line with recycled pow on the apron. Even though we had some pretty shitty conditions on most of the couloir it was still an epic line! As much as I love powder skiing I am never going to be disappointed with some ski mountaineering!! 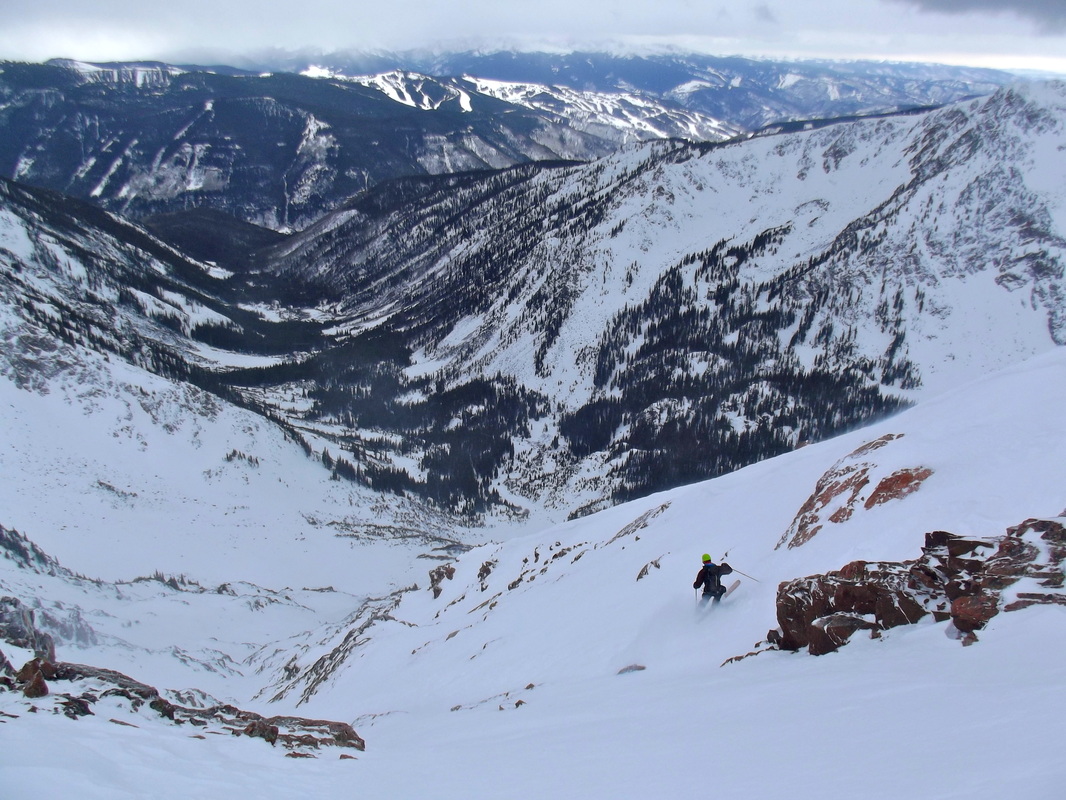 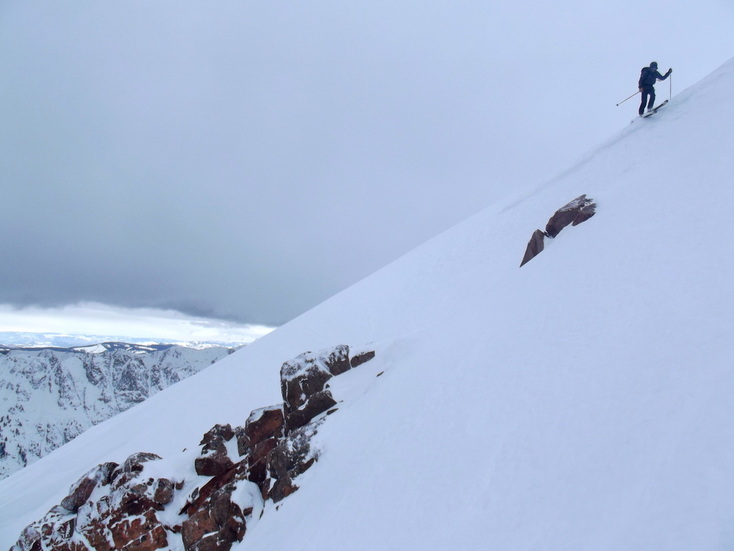 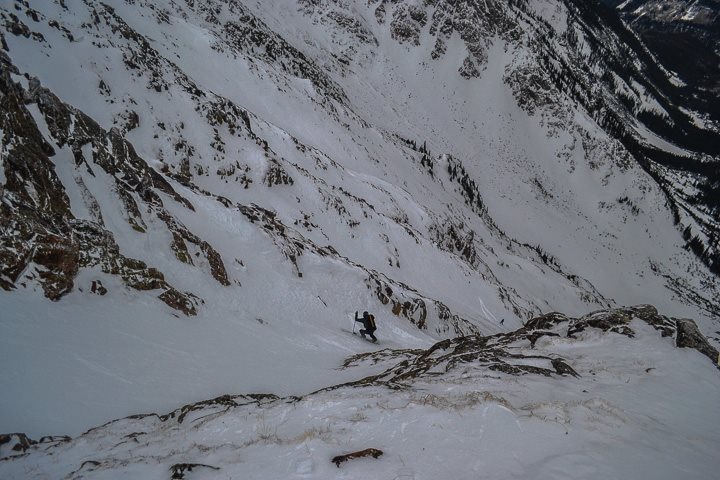 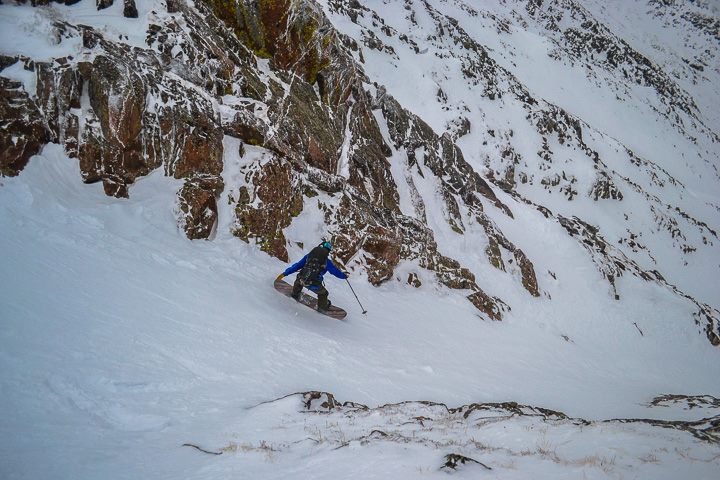 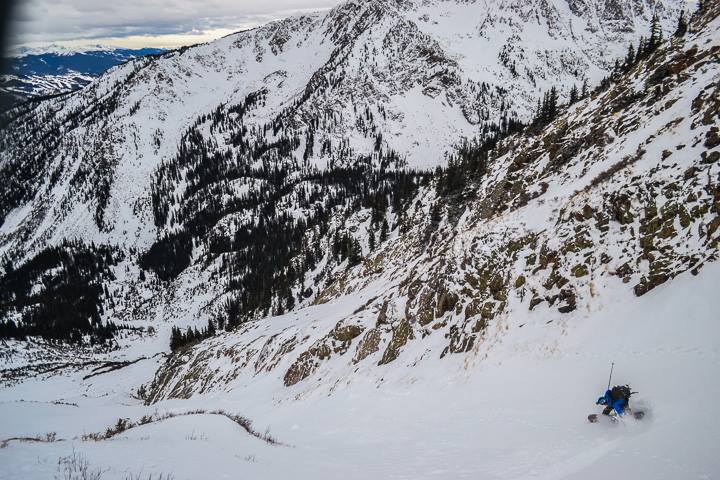 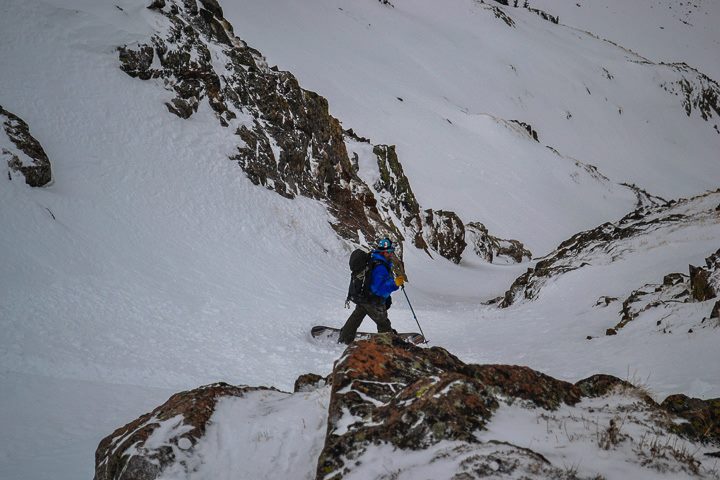 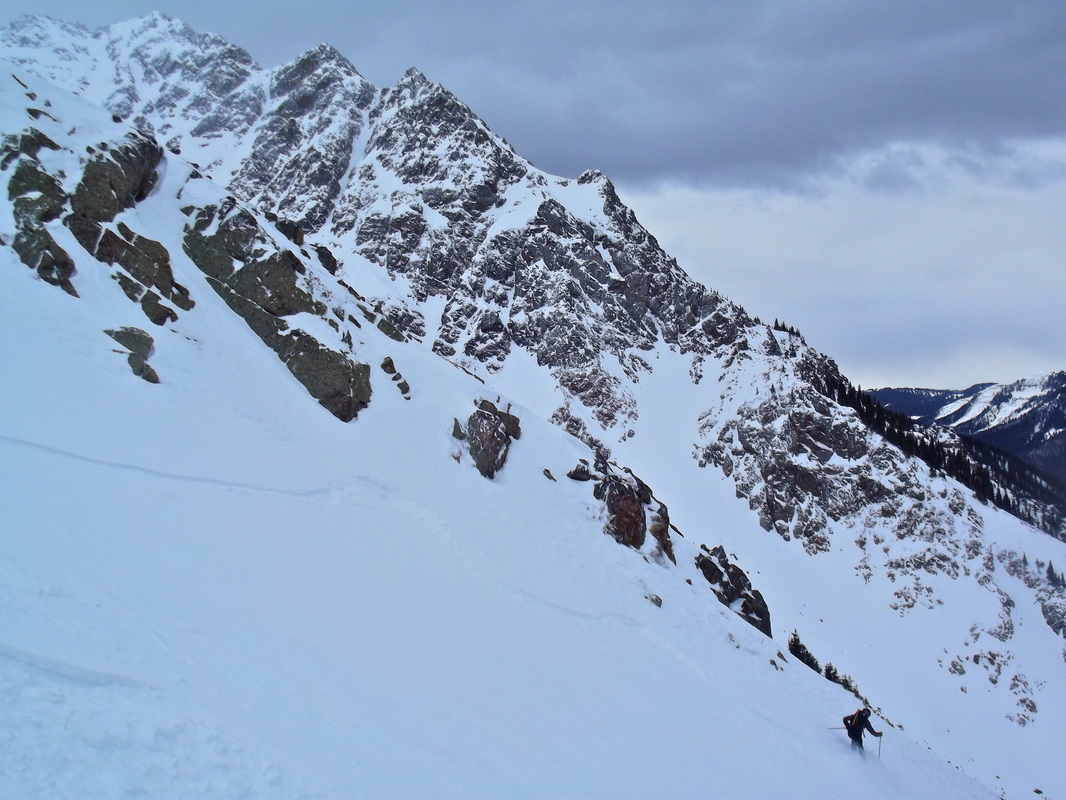 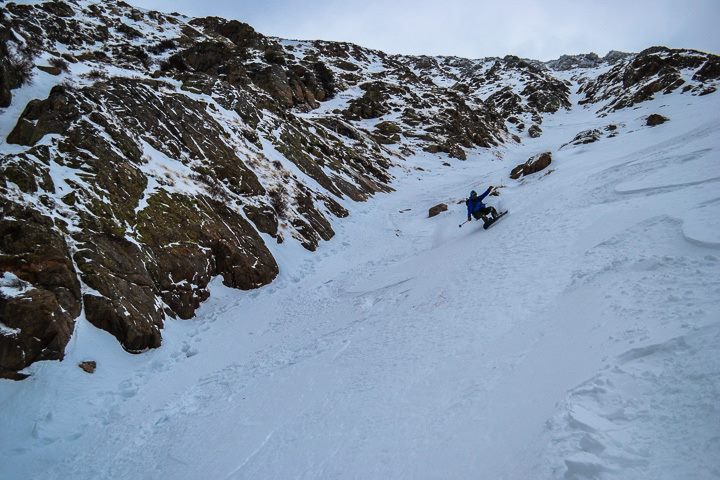 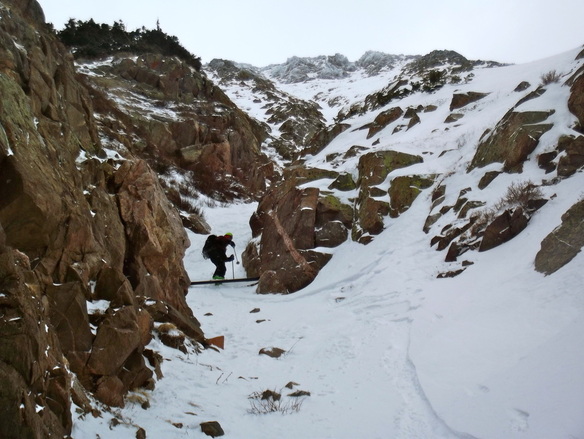 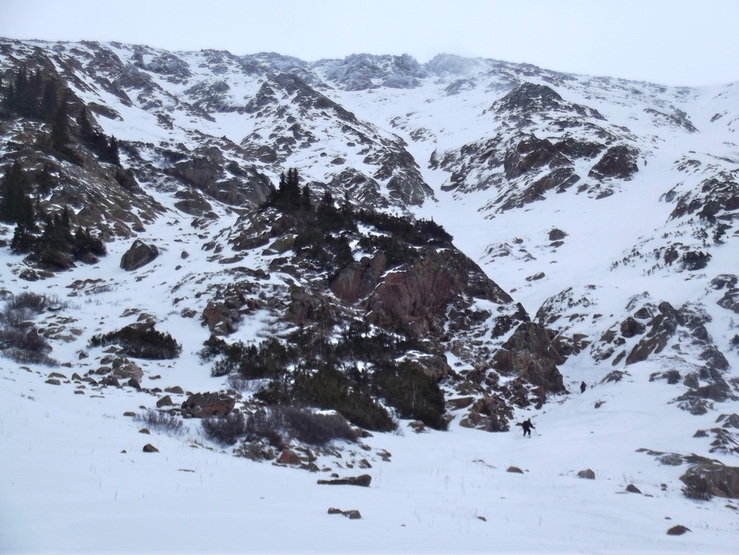 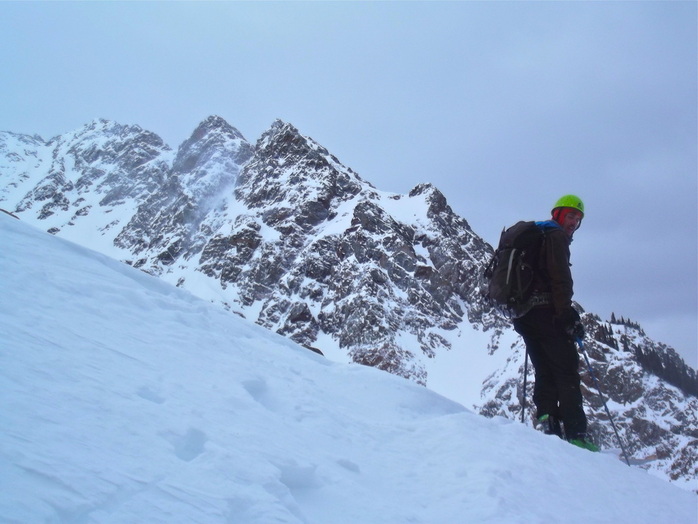 Smiles for Miles!! We all couldn't believe that we had just skied that line. Another beautiful day in the Gore Range. We have a huge storm coming in so time for some pow skiing! 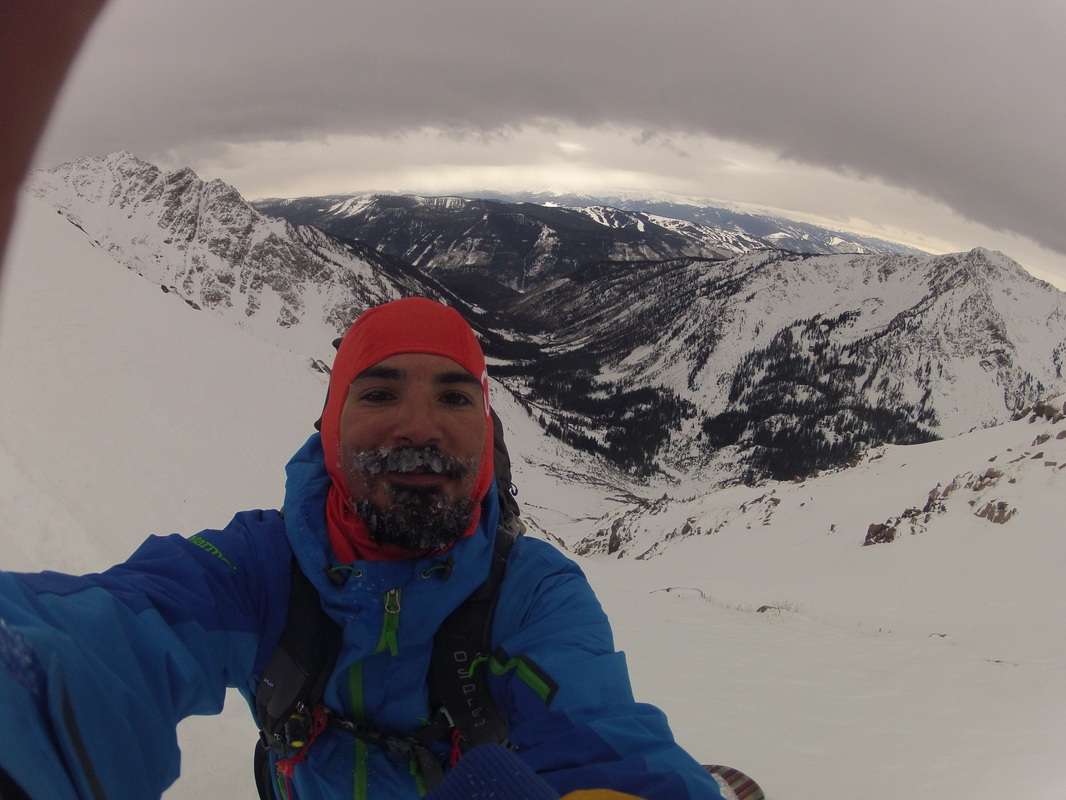