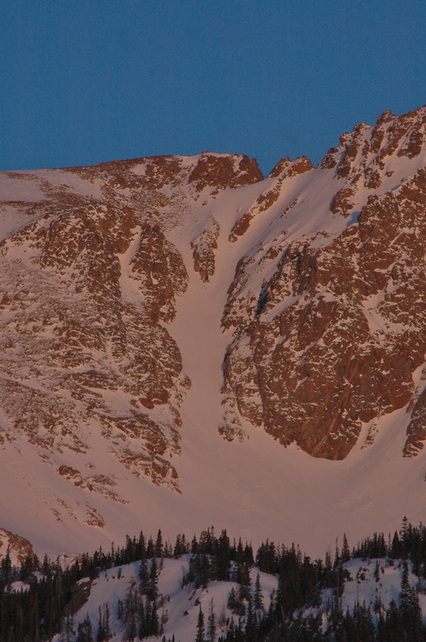 
This is Part 2 of a two day/ two night Gore Range camping trip.
Read Part 1 by clicking above link.

Alarm goes off at 4:30am as Greg and I make our way out of the frosty tent. Time to boil some water for coffee and gather our gear together under the stars of early morning. A quick prep and we are on the trail by 5am. Due to the couloir being East facing and the fact that our ascent route was to boot straight up, we wanted to try and be on the top of the climb sooner than later. Once above Salmon Lake we were graced with yet again another amazing sunrise over the Continental Divide. Breathtaking. It makes getting up at 430am worth it, thats forsure!
As we got closer to our route we both started questioning if this mission was going to be a go and we started to come up with more backup plans just in case. It looked steeper than we had thought. Ideally, our intended route was to boot straight up while assessing the snowpack and to hopefully be able to get to the ridge at the top of the right ear in the photo. My biggest concern was the top portion of the line that had snow connecting above a huge rock face. This indeed ended up being the sketchiest part of the route.
We were able to skin up most of the apron until we threw on our crampons, donned our axes, and started the climb up. The climb was fairly easy going for most part with great bootable snow. About 3-6in of soft snow bonding to a well transitioning snowpack The route started out in the mid 30 degree range in the apron as it got steeper to about 40 degrees as it walled in. Then, as the route opens up a bit in the middle of the couloir the slope angle lets up a bit back to the 36-38 range. It stayed that angle around the bend until the last 150 ft or so. Again, this was the sketchiest part of the climb. Not only was it a sustained 45 degrees and connecting to the snow on the slabby rock face to climbers right, but it was almost bulletproof as well. With a bit of a more Southerly aspect, the snowpack was very different from the rest of the couloir. Put the head down and kick those steps. A few times the snow was so firm that we could only front-point but we kept pushing on. Then not but soon thereafter we found ourselves standing in the notch on the ridgeline. After some fist bumps we transitioned to ride mode and got ready to drop. 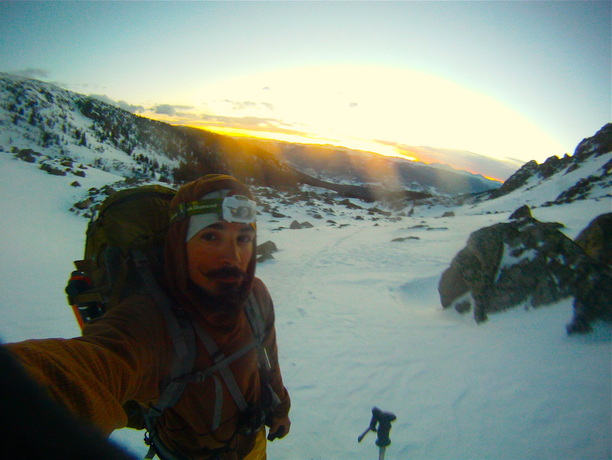 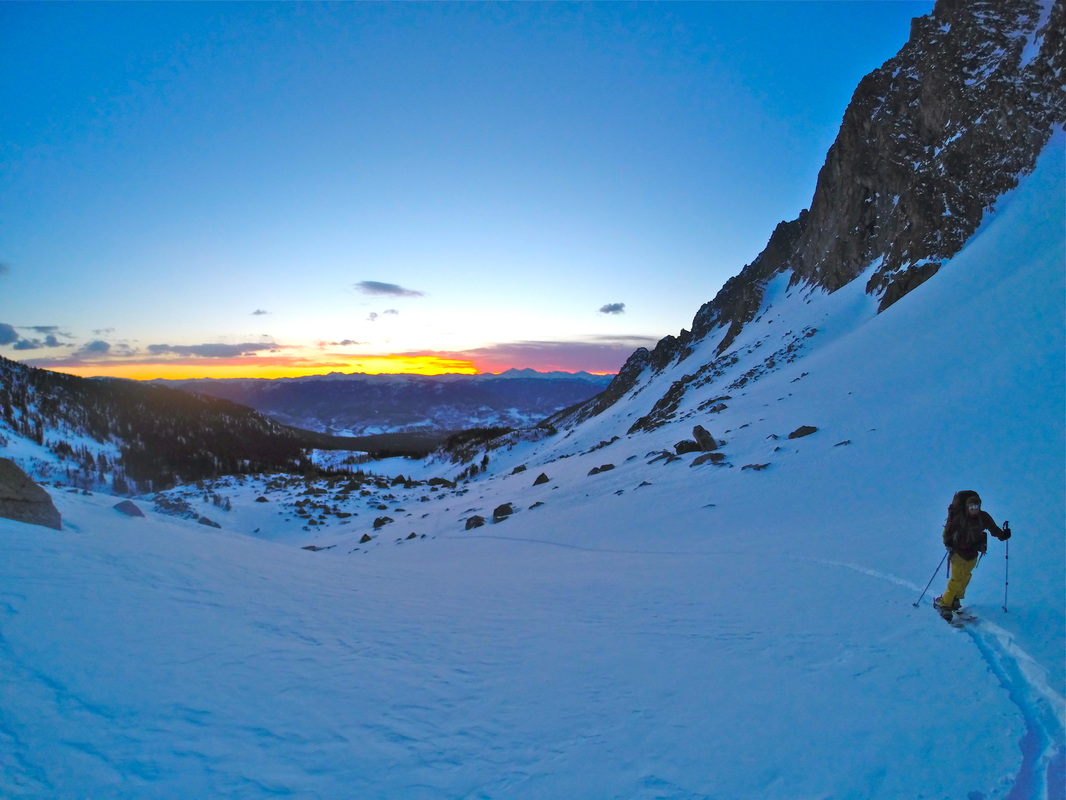 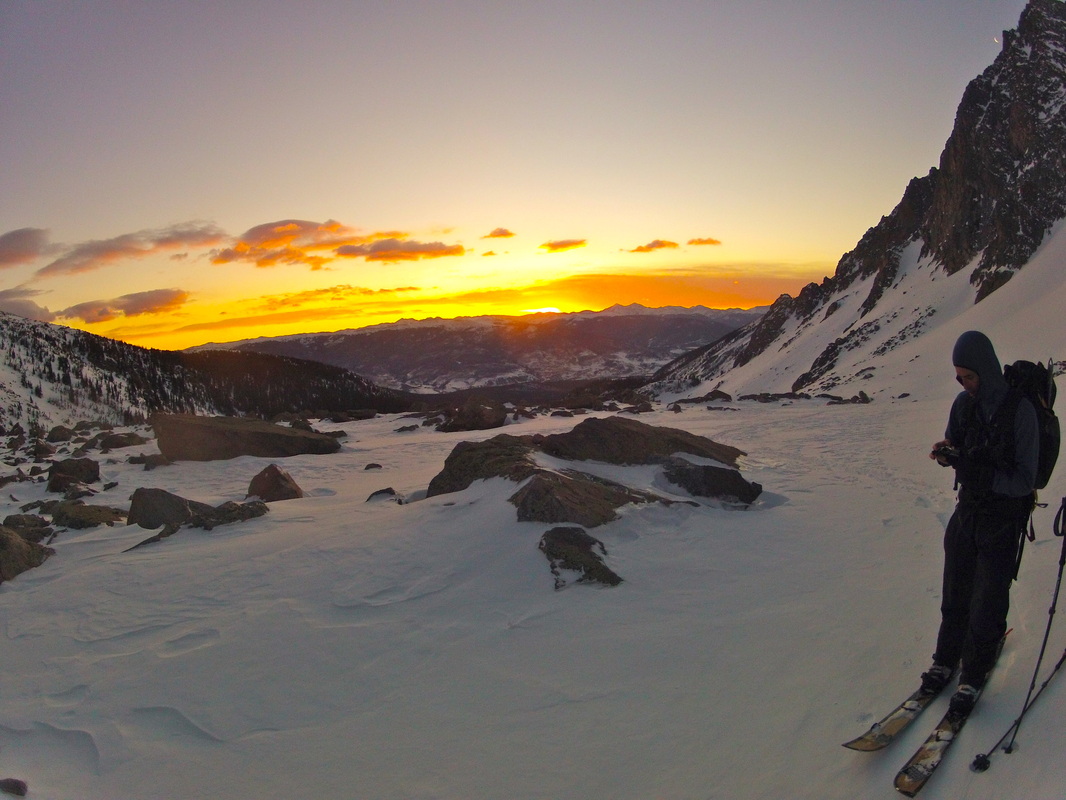 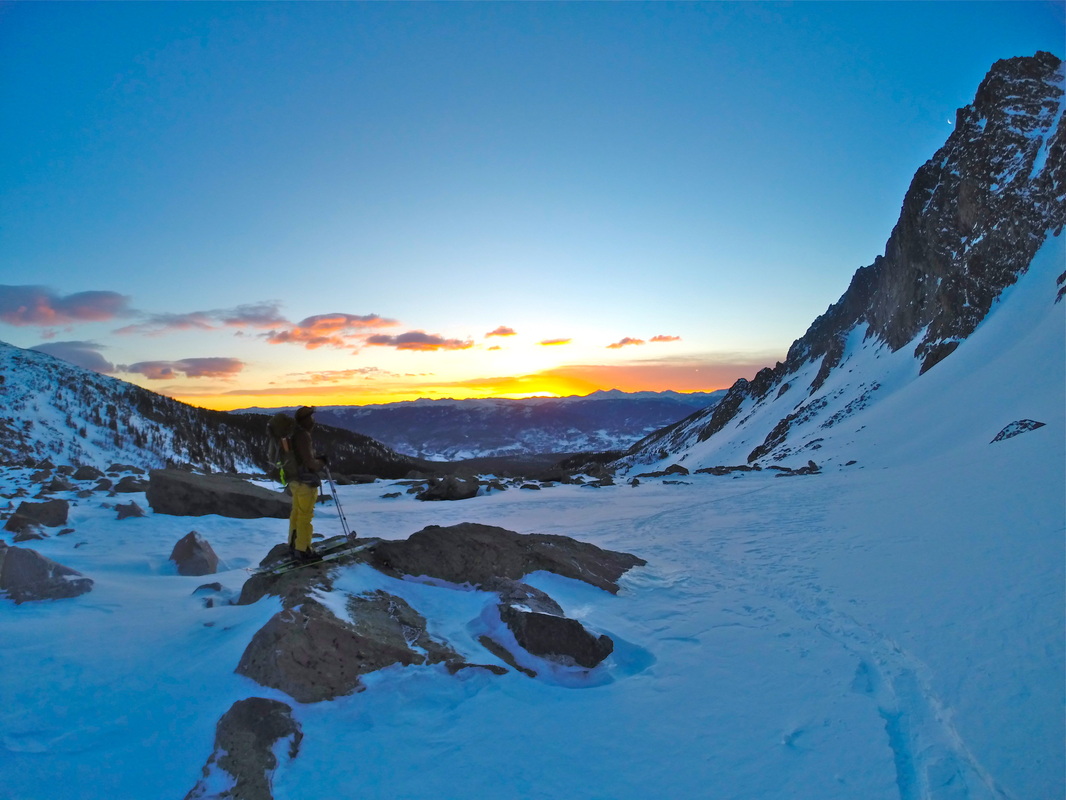 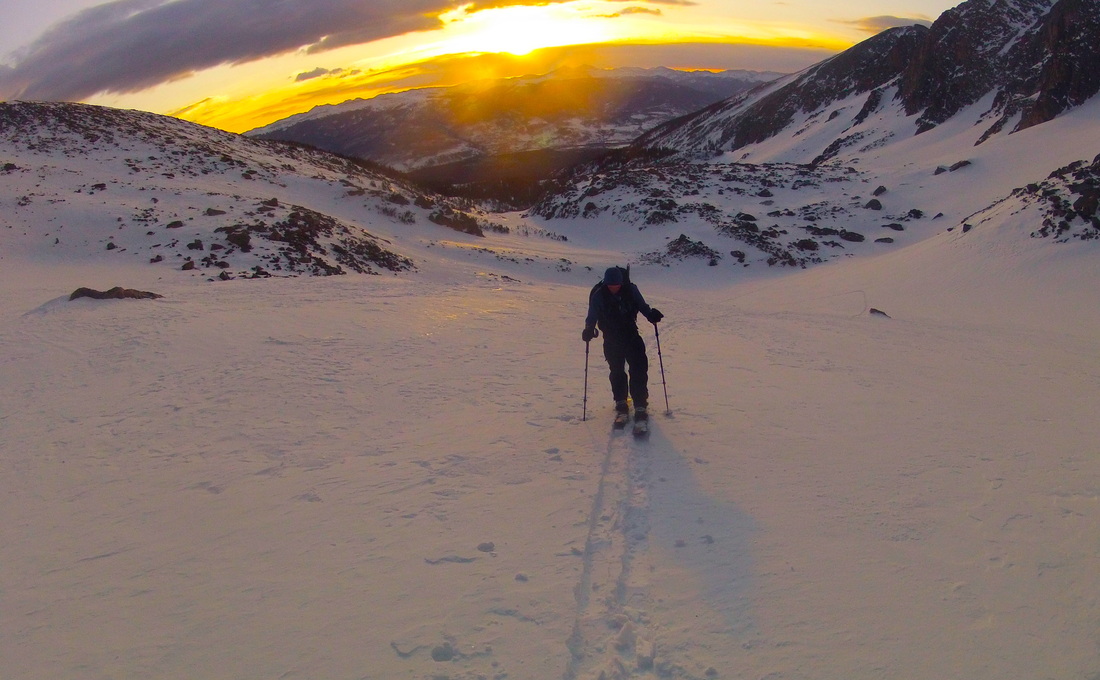 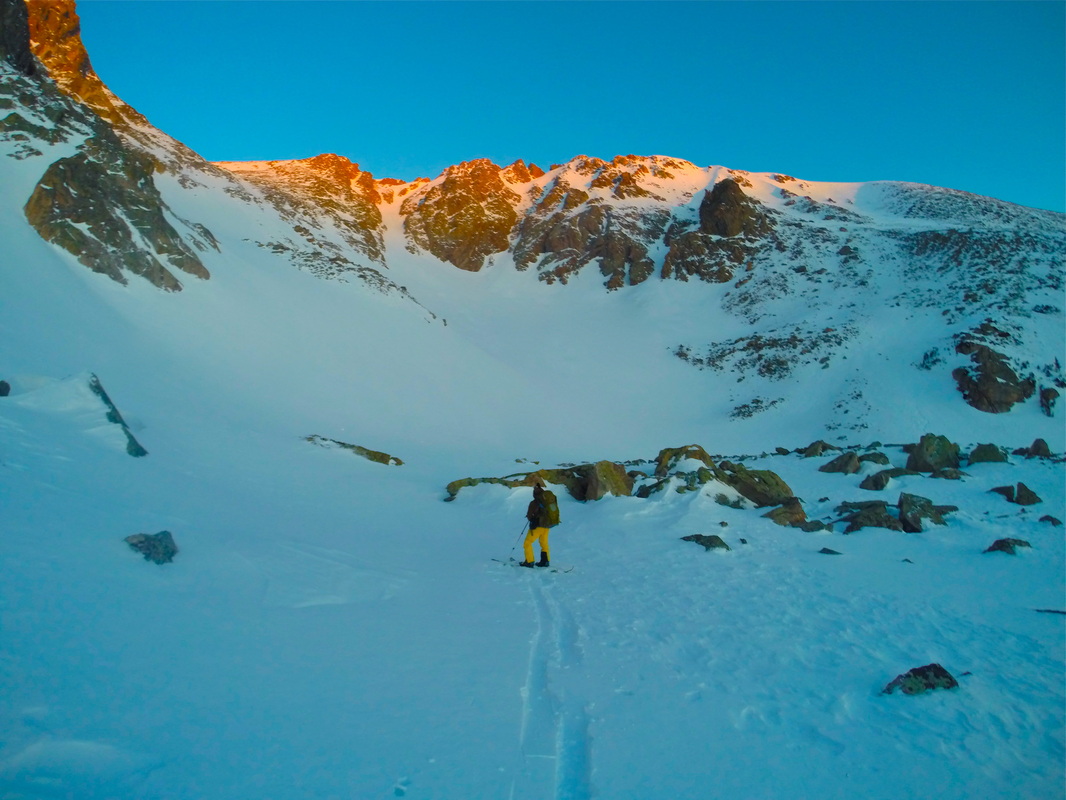 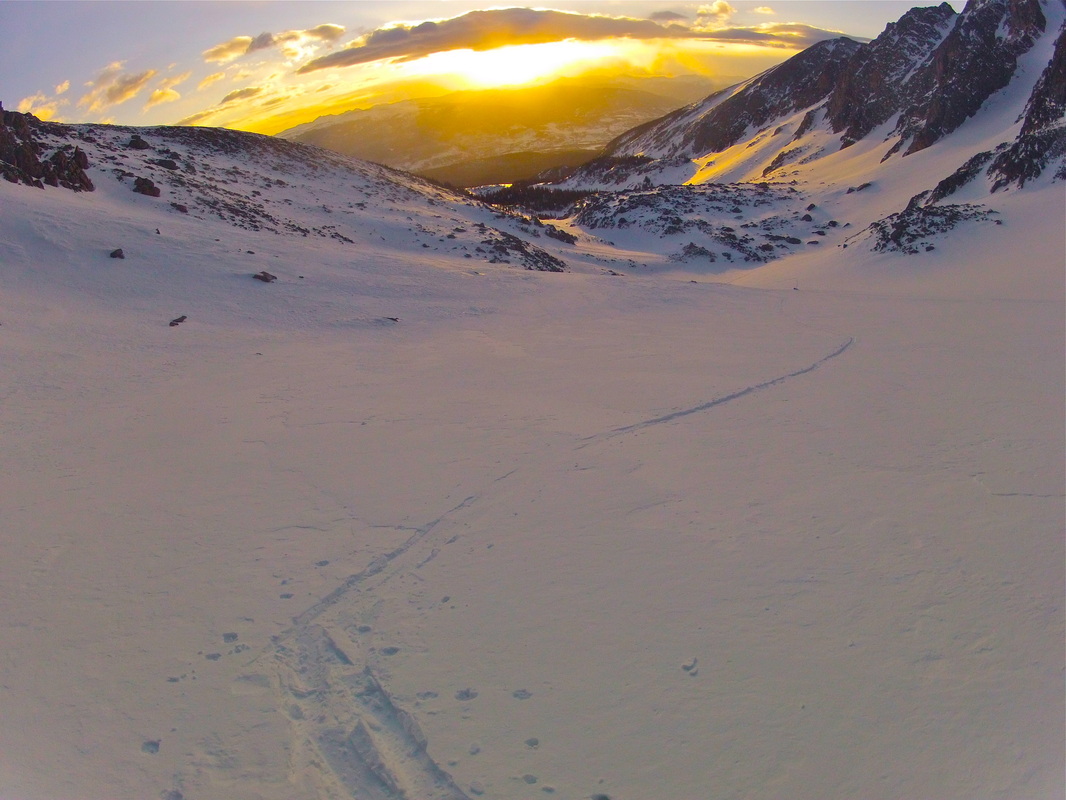 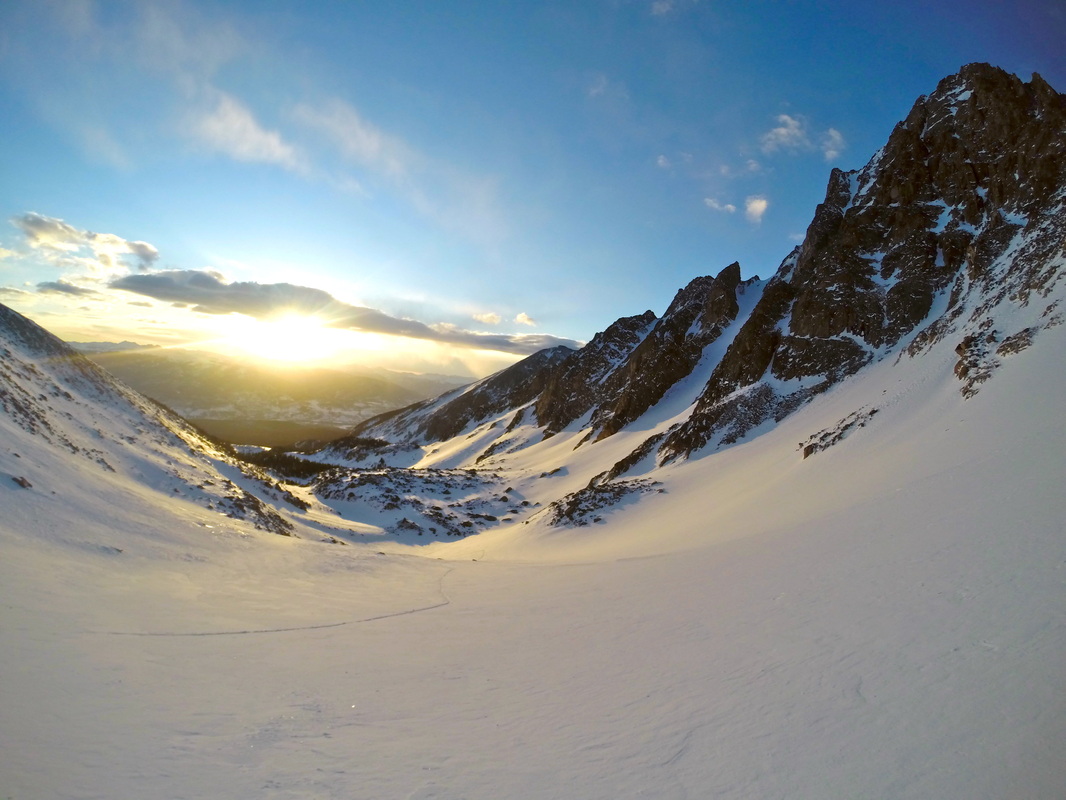 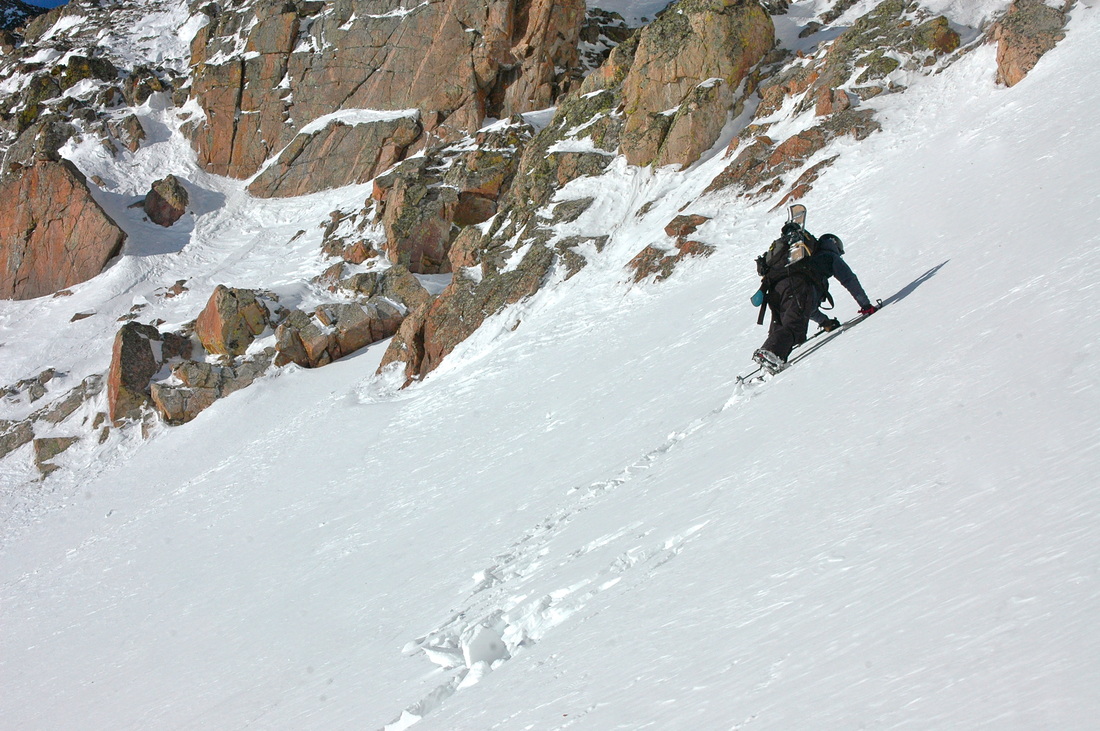 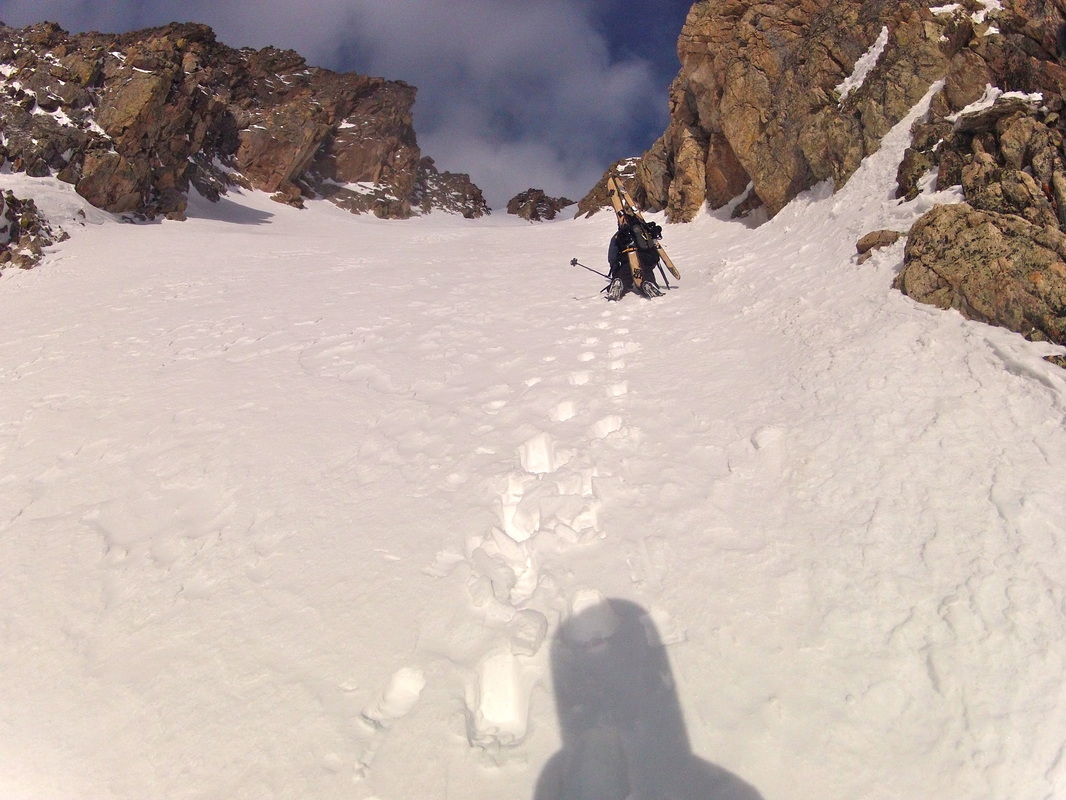 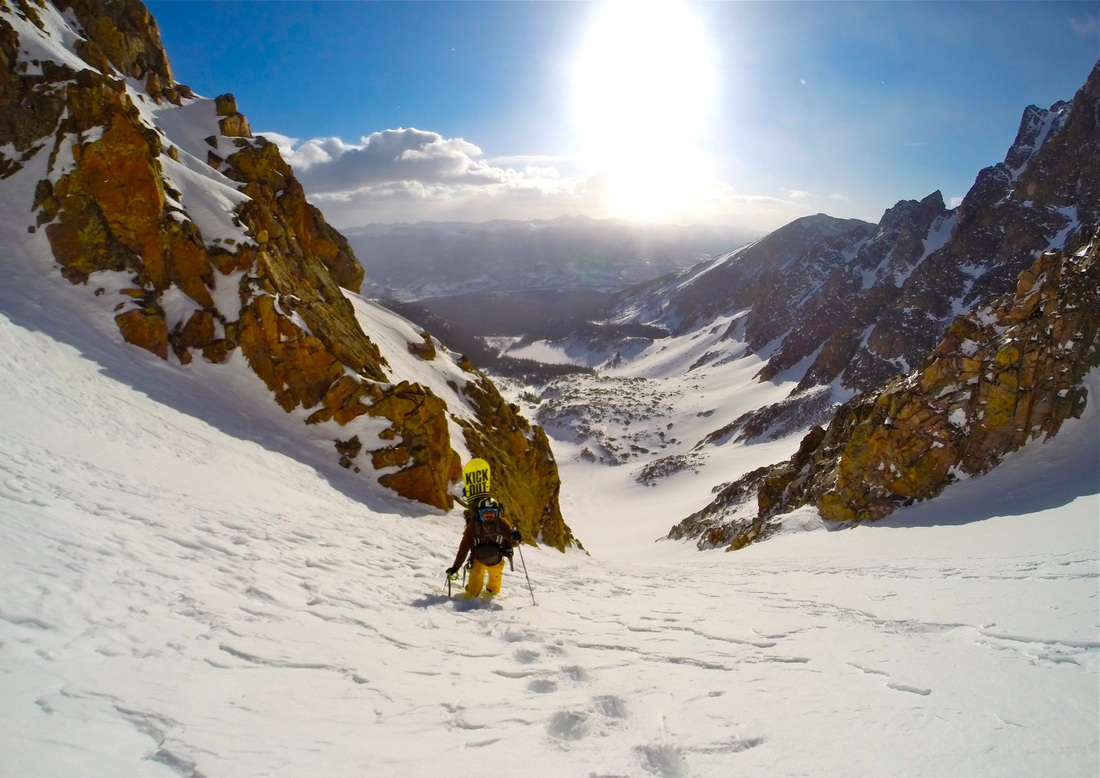 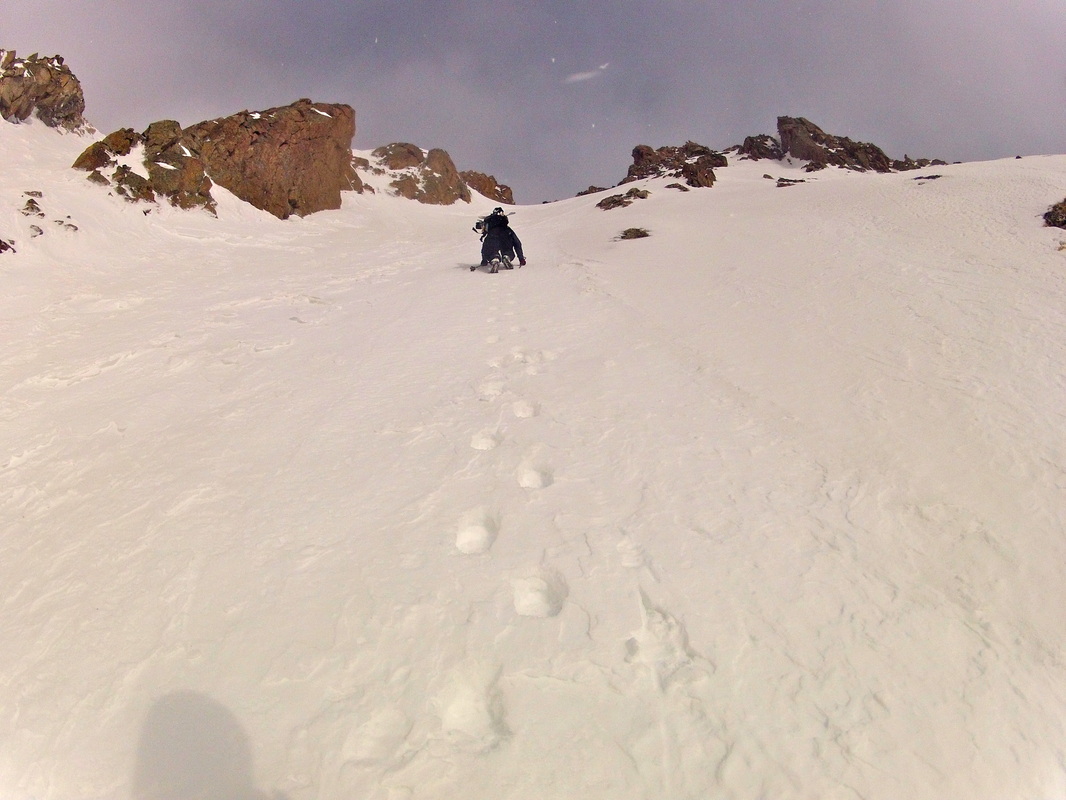 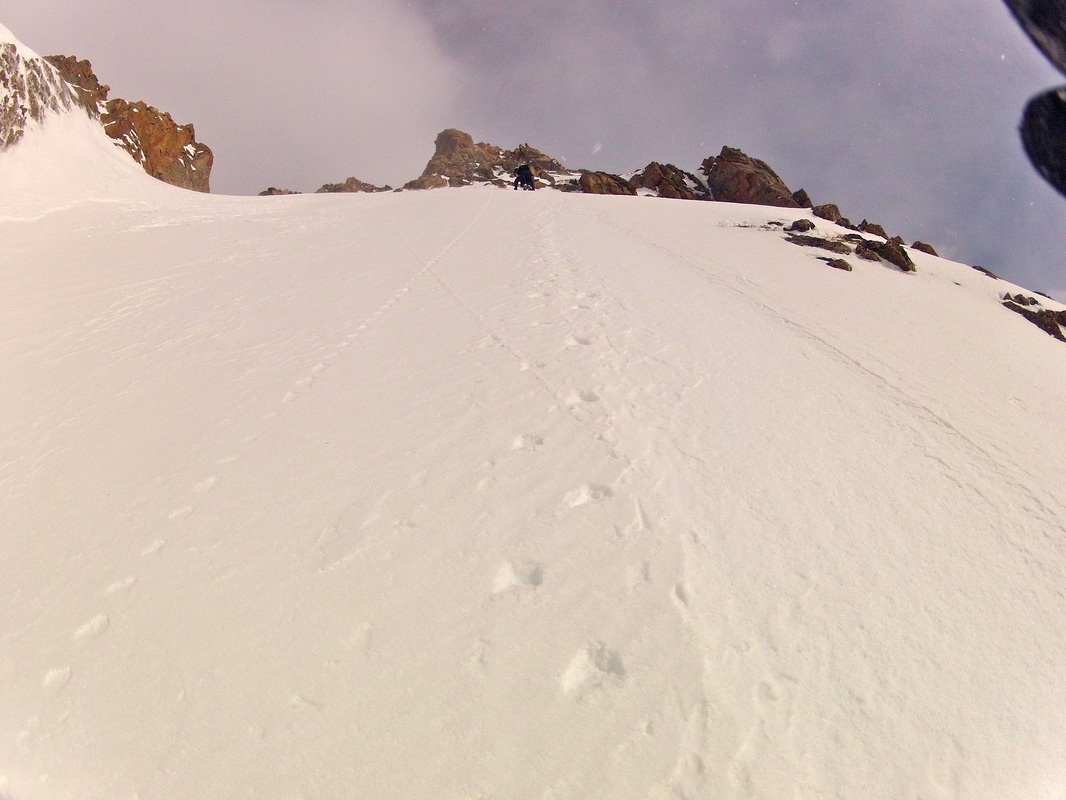 Last, steepest, and hardest part of the climb.
We then at about 9am found ourselves atop of our route. What a great snow climb! Even more stoked for the ride down we quickly transitioned. Once we looked beyond the notch you could see that the storm was quickly approaching and so didn't want to waste any time getting back to camp. 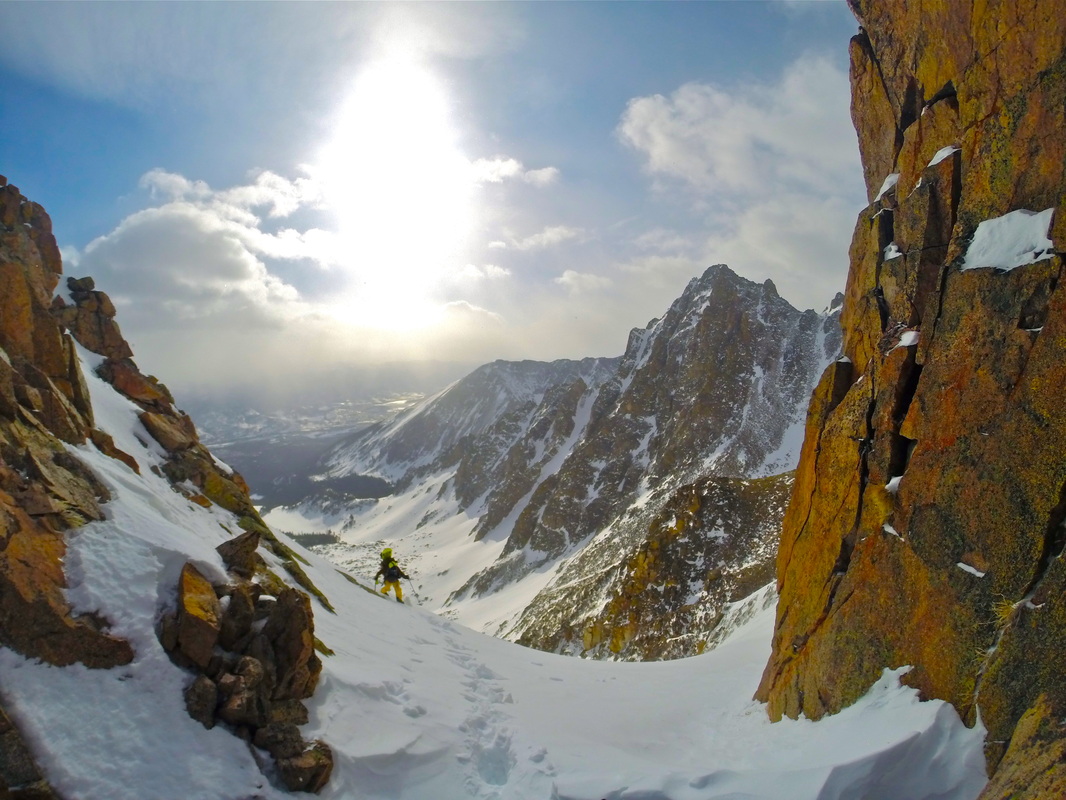 The notch and my favorite pic of the trip...East Thorne prominent behind 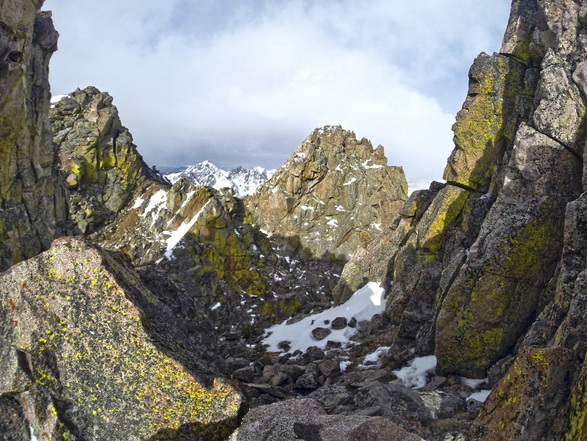 The otherside of the notch. 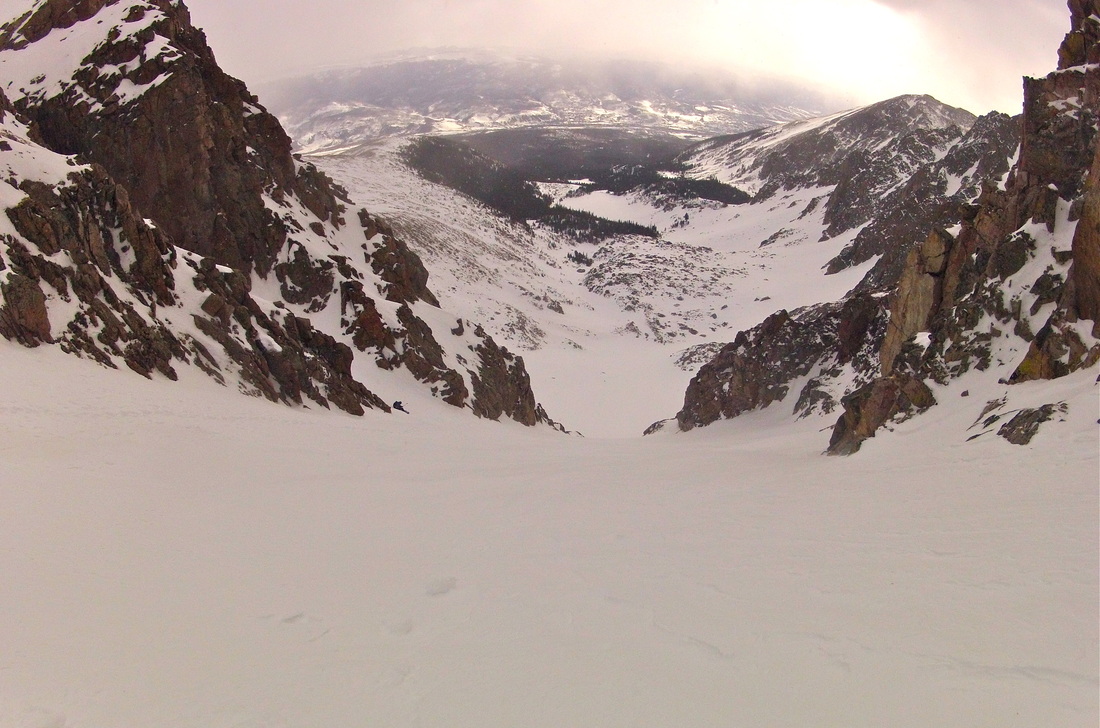 Behind the retina from about halfway down. 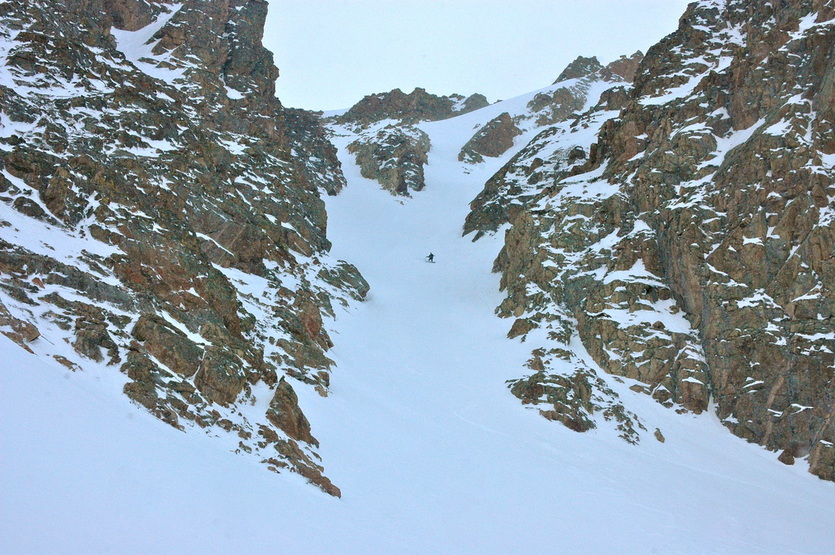 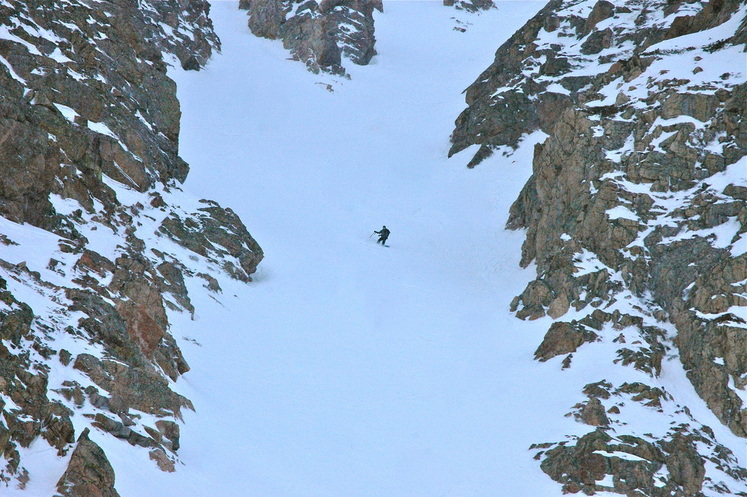 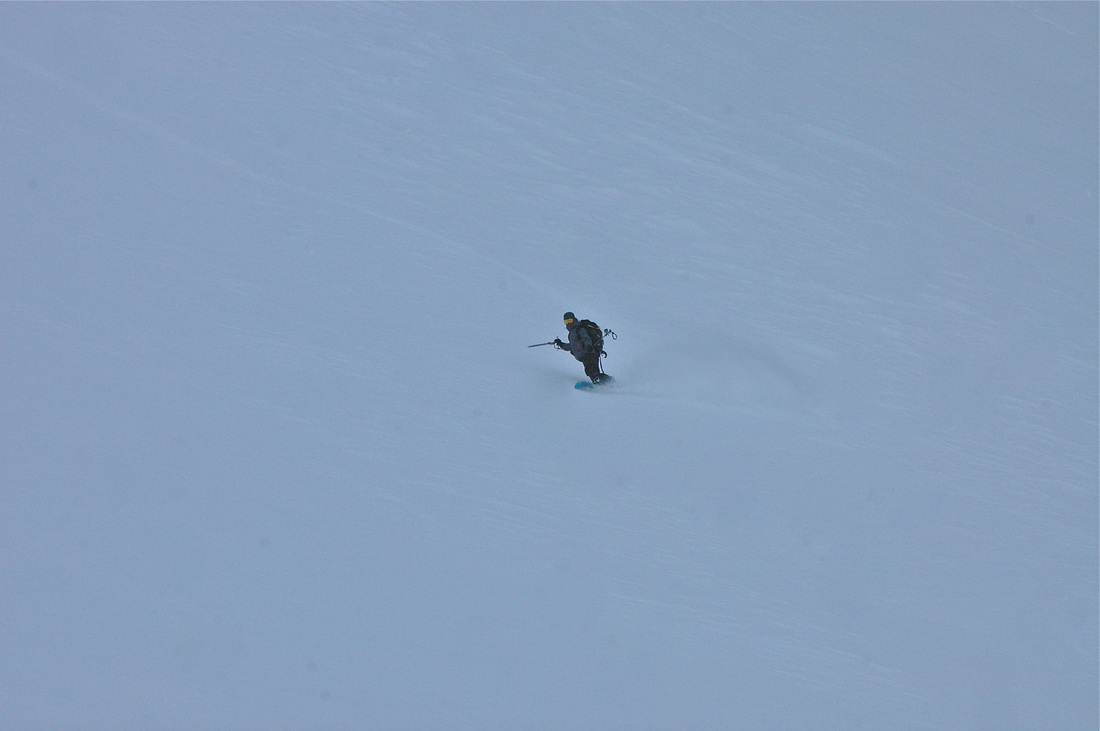 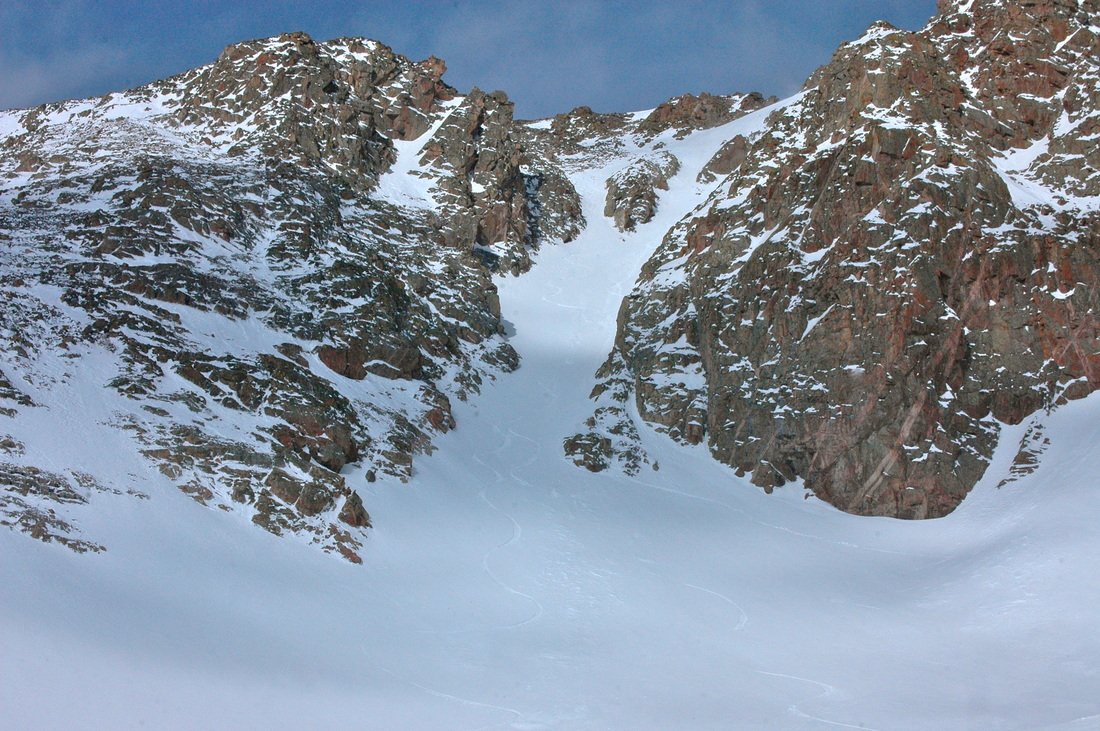 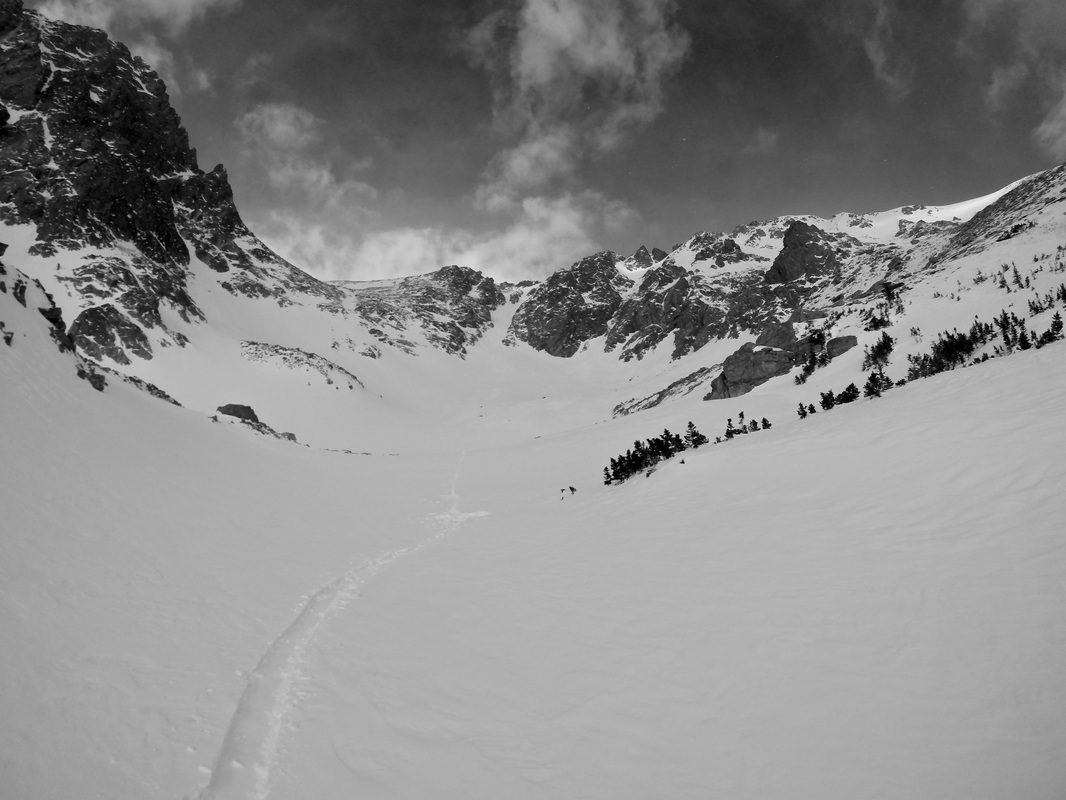 Wow! Can you say mission success? We couldn't have been more stoked. Not only for the line we had just skied, but because it had been such a perfect trip overall. We had the perfect weather window open up for this trip and were able to take advantage of it. As we got back to camp snow flurries started to fall and as I am typing this now, 2 days later, there has been almost 2 feet of new snow fall. It's such an excellent feeling to accomplish feats that you set out to achieve, while at the same time bringing you closer to the mountains and the peace that we are ever-so searching for. Thanks for reading! 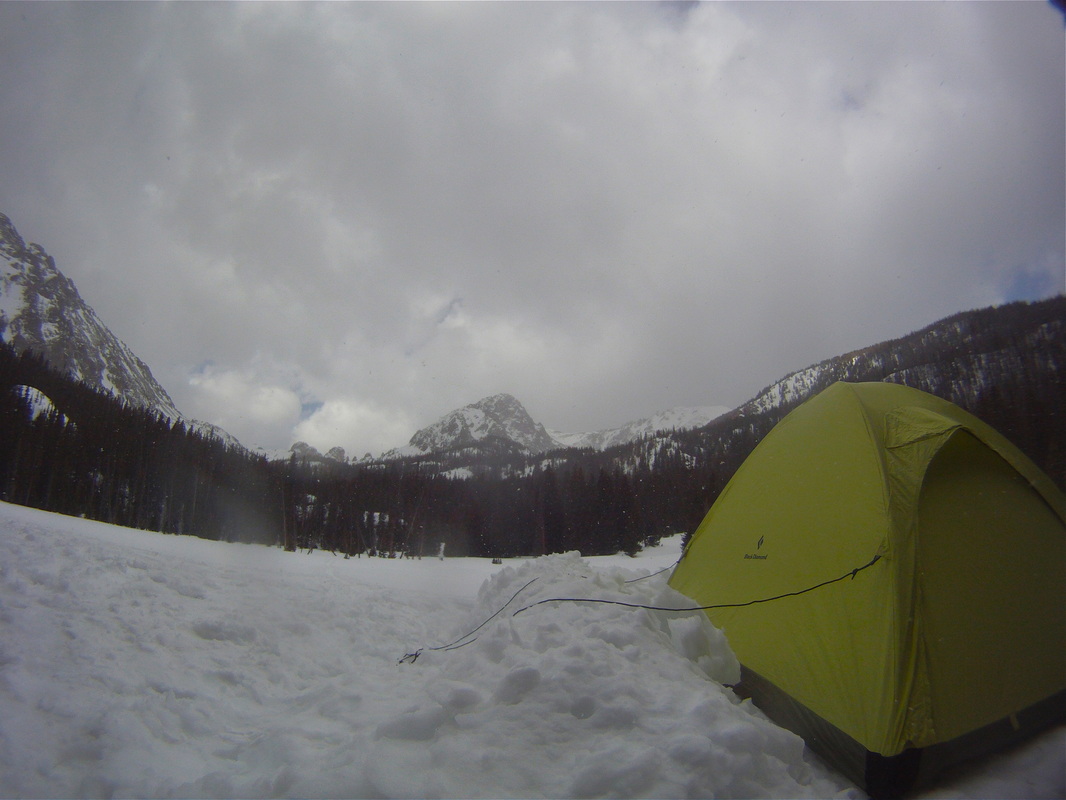